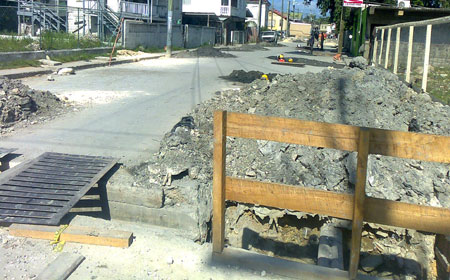 BELIZE CITY–Today, the crew of 40 street workers at Douglas Jones Street was literally knee-deep into their work, removing sludge from the canal which runs beneath the street.

Up until yesterday, however, the operations being carried out in the area as part of a municipal drainage scheme known as the Flood Mitigation Project had been at a standstill after the Ministry of Works sent a cease-and-desist letter to the company in charge of the trenching, Medina’s Construction Ltd., on the morning of Tuesday, November 11, ordering the contractor, David Medina, to shut down the project until certain health and safety measures were reinforced.

Those measures included providing personal protective equipment to workers along with a cleaning works methodology, in addition to the proper monitoring of the workmen, since the letter stated that businesses had also been complaining about loitering.

The workers were outraged when they got the news that their component of the project was being halted, but following a meeting yesterday, Wednesday, between the management of Medina’s Construction Ltd. and Belize City Mayor Darrell Bradley, work resumed on the project and the workers were called back to their jobs.

Chadwick Tingling, who supervises a gang of workers, updated us on the terms on which they were re-instated.

He said, “We had a meeting yesterday with Mr. Medina and the ‘bigger heads’ who are in charge of the project, and they agreed to give us a contract to finish the [cleaning of] the canal. The agreement is that we can finish the cleaning within 4 days and collect for the 4 days [of work], but if we take more than 4 days, we will still collect only for 4 days.”

Quincy Gentle, another supervisor, told us that they were also provided with some protective gear as stipulated by the Ministry.

“They gave us masks and headlights so we can check inside the canal and ensure that the sludge comes out. They also gave us rubber boots and more working equipment like shovels and buckets”, he mentioned.

The workers emphasized that although the job is temporary and the salary is minimal, they are appreciative of the opportunity to make an honest living.

Of note is that the men got a raise of $15 to the existing $30 a day that they were previously paid.

If it progresses on schedule, the works should be completed by next Tuesday, November 18, but if the men do not complete the work within the 4 days, then they will be required, by contract, to continue until the canal is cleared.

Although critics have cited that the workers were still exposed to the unsanitary sludge that the letter warned about, since the water underground is higher than the rubber boots the men are using, and the gloves are short and do not protect the workers’ hands, the crews were still hard at work because, they say, they all have bills to pay and families to feed.

The entire works on Douglas Jones Street are slated to be completed by the end of this month.