Drought to shift from northern to southern Belize 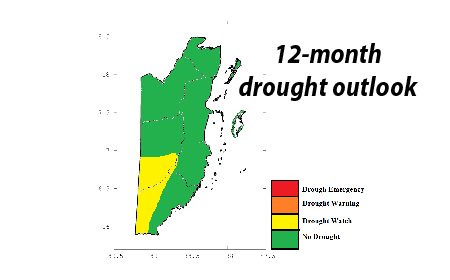 BELIZE CITY, Thurs. Feb. 4, 2016–Last year, the drought concern was mostly for northern Belize, but in the months ahead, a portion of southern Belize should be on the alert .

Cumberbatch said that there is no drought concern for Belize up to April 2016, but the extended 12-month forecast anticipates a drought watch for the southwestern and central coastal areas of Belize during the latter part of the year.

She said that a national climate forum was held last year with representatives from the agriculture, tourism and health sectors, to warn them of the anticipated drought—which was intended to help with putting in place interventions to mitigate the drought’s impacts.

“Because of the excessive rainfall that occurred in October and November of 2015 the drought situation has eased off over the entire country through to March of 2016. In the long-term, there is still concern for drought in south of the country during the end of June 2016,” said the Met Service, in an online summary.

Although drought was recorded in part of Belize in 2015, and Belizeans complained of incessant heat for a portion of the year, Cumberbatch said that the data has indicated that there was no significant change in temperature in Belize for 2015. She said that the temperatures were within the 30-year climatological norm for the country, although the forecast had, indeed, projected above normal temperatures.

Excessive rain in the last three months of 2015 alleviated the drought conditions, but that pattern is shifting. The Met Service says that, “The seasonal forecast for January, February, and March 2016 is for below normal rainfall to prevail over the entire Belize.” The rainy season commences in June.

Meanwhile, temperatures are expected to be above normal for the 6-month period February to July.

The immediate forecast calls for two cold fronts, the first to cross Belize on Friday. That front, said Cumberbatch, will be reinforced by another one coming right after.