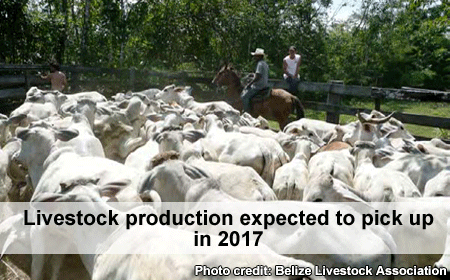 BELMOPAN, Cayo, Mon. Mar. 13, 2017–Last December, the Statistical Institute of Belize (SIB) reported to the press that the Belizean economy had contracted by 0.7% for the first nine months of the year, signaling the first recession since 2007-2008. In his budget presentation today, Prime Minister and Minister of Finance Dean Barrow announced that for the year 2016, the Belize economy contracted by 0.8%, citing the SIB as his source.

Barrow said that the Belizean economy has grown for 7 of the 9 years for which the ruling United Democratic Party (UDP) has been in office and he went on to point to a forecast by the Central Bank of Belize that the Belize economy would rebound with growth of 3% to 3.5% this year, 2017.

The recession of 2016 was not forecast in Barrow’s 2016-2017 budget. The Prime Minister had said in his budget presentation last March that “…GDP growth will moderate to between 1.5 to 2.0 percent in 2016 as the primary sector contracts further and activity in the secondary sector flatlines.”

In reporting on the economic downturn of 2016 today, Barrow ascribed it to “…a sharp plunge in primary sector output…” adding that, “All major agricultural export crops contracted except sugarcane.” To worsen matters, Hurricane Earl reduced output of banana, corn and citrus.

“Hurricane apart, citrus also lost ground to greening; and banana productive capacity was impacted by the loss of the Meridian group of farms,” Barrow said.

Performance in the secondary sector last year was positive, on the other hand, attributable to construction and the utilities, as petroleum extraction declined further. Tourism also performed well during the year, he reported.

In looking at the forecast for 2017, Barrow pointed to, “…an expected upturn in crop and livestock production as well as higher farmed shrimp production based on the field trials’ outcome in late 2016.”

He added that, “In the secondary sector, citrus juice production and petroleum extraction will dampen output, while services should remain buoyant with continued expansion in tourism, transport and communication, the distributive trade and government services.”

How is Belize doing in the regional and global context? Barrow said that the IMF’s World Economic Outlook Update issued in January 2017 projects a 3.4 percent increase in global output in 2017, from an estimated 3.1 percent in 2016; while the forecast for Latin America and the Caribbean calls for growth of 1.2 percent in 2017, after a contraction of 0.7% in the previous year.

“A caveat to these projections is the impact of changing US policies,” Barrow added.