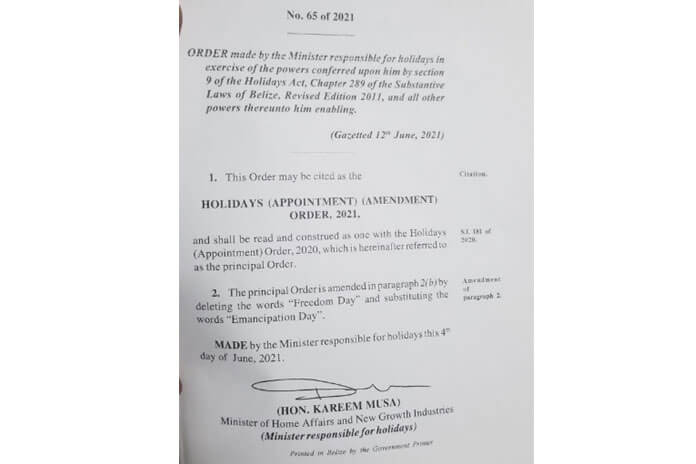 BELIZE CITY, Mon. June 14, 2021– Last week, the government of Belize released a revised edition of the 2021 Public and Bank Holiday list, in which there was a change of the name of the August 1st holiday, from Freedom Day to Emancipation Day.

The chairperson of the UBAD Education Foundation, Yaya Marin Coleman, has been rallying for this change since the initial designation of the holiday. She had conveyed to the government, in written correspondence and through the public forum, that the changing of the name of the August 1st holiday to Freedom Day diminished the significance of our ancestors’ struggle for liberty and effectively resulted in a distortion of a narrative important for Afro-Belizean citizens.

Her incessant lobbying for a correction of that error in judgment and for the holiday to be given a name that fully acknowledges the realities of slavery in Belize, ultimately led to the government’s decision, through Minister responsible for Home Affairs, Hon. Kareem Musa, to use the term Emancipation Day instead of Freedom Day.

The first Emancipation Day celebration in Belize, which took place about 50 years after the end of slavery in 1888, was led by patriot Simon Lamb and other Belizean men and women who marched to the governor’s office after making their way through the central streets.

In 1833, the British Empire passed the Slave Emancipation Act after hundreds of years of practicing chattel slavery, disenfranchising over 10 million African natives. Emancipation Day commemorates the end of slavery across territories in the British Empire and is celebrated under various names, including Freedom Day, Jubilee Day, and Liberation Day.

In Belize, the day has never been officially celebrated as a public and bank holiday. The UBAD Education Foundation, led by Yaya Marin Coleman, has spearheaded yearly celebrations and led efforts to sensitize the population on the importance of commemorating the day. In 2019, the government of Belize officially recognized the importance of acknowledging emancipation day, and in late 2020, the newly formed Briceño administration announced that the day on which emancipation took place would be a holiday, which it originally referred to as Freedom Day. As a result of the name change, Belizeans will observe, for the first time in 2021, Emancipation Day.