Farewell to the “Frogman,” Ruperto Alvarez 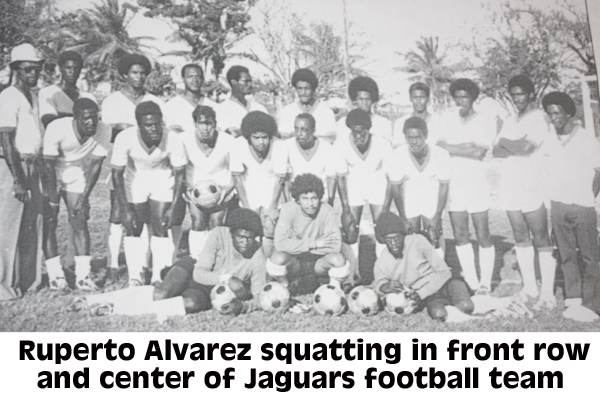 If you love “di bola,” you understood Puerto, or Perto, as many called him. To me he was always “Puerto,” a fellow “ball per,” who in his veteran years spent many a moment of anguish at the criminal acts perpetrated against our beloved sport by those who proclaimed to love football. But we knew different. All those who truly love football know who are the real ‘ballers, and who are the selfish, sanctimonious Pharisees, taking communion on Sunday morning, and murdering the game the rest of the week.

Ever since I knew him back in the early 1970’s, Ruperto Alvarez was always a dedicated football player, who invested many a waking hour practicing his craft, working on his ball control skills, and gladly teaming up with anyone who was inclined to juggle the ball or play small sided games.

Puerto was not tall, and he was not fast. In fact, except for the spring in his legs and good reflexes, which helped to make him a formidable goalkeeper and earned him the “Frogman” nickname, he was not very athletically gifted. But hard work and love of the game made Puerto develop his ball playing abilities to such an extent that he could always “ketch team” with some of the other top players of his time. And his skill was not limited to minding goal, but he could play out effectively in various positions. He could control the ball, and he could kick with both feet, as well as expertly head the ball. In other words, Puerto had developed himself into a complete football player.

When an adventurous entrepreneur named Charlie Pommels decided to build a professional football team in Belize City back in the early 1970’s, when there was not even a semi-pro league in existence, Puerto was right there alongside some of the best players of the day on the Jaguars football team, whose players were temporarily banned by the then “Amateur Football Association.” Reports were that they had an even record on a brief tour in Honduras, a win, a draw and a loss.

A number of outstanding football players, and fans even, from that era have turned away from the game, making only very rare visits to the ball park. Generally, they express a hurt and disappointment, anger even, at the way the game has deteriorated, and what they perceive as corruption among individuals at the highest levels. They also feel that they are not impressed by the quality of play they see exhibited by the young players of today; and the charges at the gate are not encouraging either. Whatever they all find discomforting about the game these days, many old timers have stayed away, and Puerto was one of them.

But football was still never far from his heart. And at any social function, I was always glad when I encountered Puerto. Here was someone that I could talk with. His interests were varied, but football was still a passion, and we could share a lot of discussion on the subject, and on what we thought needed to be done to “bring back” the game.

During his playing days, I am sure Puerto played for 1976-77 Belize City champions White Label, as well as the professional Jaguars, which only lasted a few months. I am told he also played for B.E.C. and Belprint. I know he coached the Milpros team for a while in the early 80’s. In fact, he was always a “Plaza” guy, and was so close to the Milpros group back in 1983-84, that he was elected “Chairman” at the first official “club” meeting, after the newly elected Association Executive, headed by Garrincha Adderley, pushed for teams to develop a “club” structure.

“Tong,” as he was also affectionately called by some teammates, was from another generation of football players. Many of today’s young ‘ballers might not even have been aware that Puerto used to play the game. Those of us still around from that era know differently, and we are all tremendously saddened by his sudden passing.

Tong was always a dedicated family man, and our sincere condolences go out to his wife, Yvette, and their children, other relatives and friends. R.I.P. brother Ruperto Alvarez.