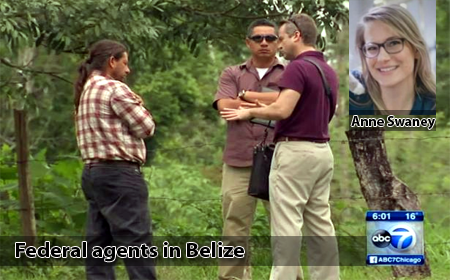 BENQUE VIEJO, Cayo District, Thurs. Jan. 21, 2016–The Belize Police Crimes Investigation Branch, in collaboration with Benque Viejo police, are conducting an intense investigation to solve the murder of American television executive, of ABC 7 Chicago News, Anne Elizabeth McComb Swaney, 39, of Chicago, USA, who was killed on the banks of the Mopan River, near the Nabitunich Stone Cottage Resort in Succotz, a village in the Cayo District.

Her body was found in the Mopan river at about 8:00 Friday morning, January 15, after she was reported missing at about 5:00 Thursday evening, January 14.

Swaney was on a 7-day vacation at the Nabitunich Resort. The manager of the resort told police that at about 8:00 on the morning of Thursday, January 14, she went to the nearby Mopan river to practice yoga and meditate, but failed to return.

Benque police who began the investigation into the murder by interviewing the staff and guests of the resort, reported that a Guatemalan man who was found in the area where Swaney’s body was found, was detained, and it was found that he was in the country illegally.

The illegal immigrant was then charged with illegal entry by the Immigration Department, but he has not yet been taken to court; neither was he charged in connection with Swaney’s murder.

Swaney’s semi-nude body was found at about 8:00 Friday morning, floating at the edge of the Mopan River bank, within the proximity of the resort. An autopsy conducted on the body certified the cause of Swaney’s death to be asphyxia due to compression of the neck area, strangulation, and blunt force traumatic injuries to the head and neck region.

Police said that upon observing the body, they discovered physical injuries such as gashes on both sides of the forehead about 1 inch deep, and bruise marks along the neck, back and hands.

On Tuesday, January 19, ABC 7 Chicago, a television station in the USA, where Swaney had worked, announced that an elite team of agents from the Federal Bureau of Investigation (FBI) had travelled to Belize to help in the investigation of her murder.

ABC 7 Chicago reported that the agents went to the resort where Swaney had been vacationing and interviewed the staff and guests, and re-interviewed them, and as a result, investigators are looking at a staff member of the resort, who is a ranch hand, as being a person of interest.

Among the many international media houses that reported on the murder of Elizabeth Anne Swaney, apart from local media, are: ABC News, ABC7 News, People magazine, CNN (Cable News Network, USA), the New York Daily, Hollywood Daily Mail and the Chicago Tribune – all of the U.S.; as well as the Daily Mail of the United Kingdom, among 68 media houses.

Rafael Martinez, Police Press Officer, told Amandala tonight, when questioned about the FBI apparently conducting their own investigations in Belize, that no official request for the FBI’s assistance was made by Belize police. The option of getting such assistance is available to them, he said, but such a request has not been made.

Martinez said that if the FBI is here, they are here unofficially. The foreign media, however, have been definitive in their reports that the FBI is in Belize investigating Swaney’s murder. Martinez did not say how it is that foreign police can investigate a crime in Belize without their permission.

Swaney’s death occurred less than two weeks after Canadian movie director and filmmaker Matthew Klinck died in his yard after he was brutally stabbed 14 times in the neck and the upper part of his chest.

He was last seen on Saturday, January 2, going to his house in Selena, Spanish Lookout, and his decomposing body was found in his yard at about 8:00 Monday night, January 4. Police ruled that his death was the result of murder, and the motive for the murder was robbery. Klinck reportedly had in his possession a large sum of money with which he was going to buy a property.