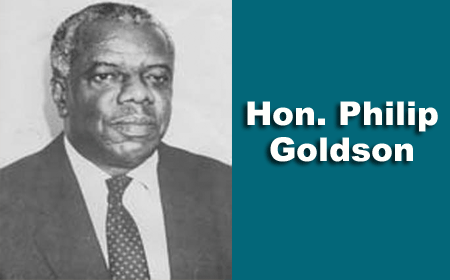 BELIZE CITY, Mon. Dec. 4, 2017-Information gleaned from a document “Released under the John F. Kennedy Assassination Records Collection Act of 1992,” suggest that the challenge to Hon. Philip Goldson’s leadership of the National Independence Party (NIP), by the attorney Dean Lindo in 1969, might have been orchestrated by Washington and Whitehall because of FBI intelligence which showed that Goldson had gotten too close to Fidel Castro and communist Cuba. When Lindo made his challenge, the NIP, which held two seats in the House of Representatives (Goldson’s Albert seat and Edwin Morey’s Toledo North seat), was constitutionally considered Her Majesty’s Loyal Opposition.

The revelations are astounding for political historians, because Mr. Goldson was surrounded in the late 1960s by people who were pro-British, pro-American, Christian, and definitely anti-communist. It is true that Mr. Goldson was so intense where the Guatemalan claim to Belize was concerned, that he might have thrown caution to the winds, so to speak. But it would be safe to say that most of Mr. Goldson’s supporters would have been alarmed by a Cuban connection.

After Mr. Lindo was defeated by Goldson for the leadership of the NIP, he left the party to form the People’s Development Movement (PDM) in October of 1969. Lindo’s split with Goldson in mid-1969 put the People’s United Party (PUP), which, under the leadership of the Hon. George Cadle Price, held 16 of the 18 seats in the House of Representatives at the time, on easy street politically, and a hastily assembled “NIPDM” party was crushed at the polls in the general elections of December 1969. Of the eighteen candidates the NIPDM put up, only Philip Goldson was able to win a seat – the aforementioned Albert seat. The Opposition were caught with their pants down when Mr. Price called general elections in November of 1969, elections which were not due until March of 1970.

The PDM was basically pro-American, which, especially in that era (the 50’s, 60’s, 70’s during the so-called Cold War), meant anti-communist, that is to say, anti-Cuba. In early 1973, the PDM merged with the Goldson-less NIP (Mr. Philip was in London studying law), a newly formed Liberal Party, and a faction of the UBAD Party which had broken away from that group’s core base, to form the United Democratic Party (UDP). Belize, it was then felt in conservative, business circles, had a party to counter Mr. Price’s budding socialist tendencies. And, for the first time, Belize had an Opposition political party, the new UDP, which explicitly considered the “economic development” of Belize more important than Guatemala’s ugly claim to our territory.

Cuban leader Fidel Castro had been increasingly hostile to Guatemala after that Central American country allowed its territory to be used as a training base for Cuban exiles, organized and financed by the American Central Intelligence Agency (CIA), planning to invade Cuba and overthrow Castro in 1961. Indeed, Guatemala was already in the bad books of progressive politicians in our region, such as Fidel, after the Guatemalan oligarchy, with the support of the said CIA, overthrew the land reform government of President Jacobo Arbenz and drove him into exile in 1954. Right-wing Guatemala’s disdain for its peasant class exploded during a civil war which began in 1960 and lasted for 36 years. Guatemala’s armed forces massacred over two hundred thousand of the republic’s Indigenous citizens.

Did our beloved Belizean national hero, Hon. Philip Goldson, secretly forge an alliance with Cuba to help protect our nation when Washington and London schemed against us? In 1968, Goldson led Belize’s rejection of Bethuel Webster’s Seventeen Proposals which, effectively, would have made Belize into a satellite state of Guatemala. Every step of the way, it now turns out, Mr. Goldson was under intense surveillance by the United States FBI and British Intelligence. It is possible that Mr. Goldson attracted that increased scrutiny after he exposed the Thirteen Proposals in 1966. The Thirteen Proposals were what Mr. Goldson remembered of talks being held between the British and the Guatemalans in the United States, with the PUP and NIP as observers. The Belizean politicians had been sworn to secrecy. Mr. Goldson therefore risked jail when he revealed the Thirteen Proposals. The official release of the Seventeen Proposals in 1968 confirmed Mr. Goldson’s honesty, accuracy, and courage.

An FBI paper dated January 5, 1968, claimed that a then confidential source, one William George Gaudet (the publisher of Latin-American Reports), stated that he was in Belize (British Honduras) during the Christmas holidays (1967), and that “he heard several comments from acquaintances that Philip Goldson … was giving every indication of working with the Cuban Government. Goldson, it was rumored, was conducting a siege of agitation to create continued friction between Belize and Guatemala.” Gaudet, who claimed to be a “personal acquaintance” of then British Honduras Governor, Sir John Paul, said he had “interviewed Sir Paul in connection with the Goldson matter.” The same FBI paper to which we referred earlier in this paragraph, says that Sir Paul reportedly told Gaudet “that British Intelligence is almost sure that Goldson is being paid by Cuban authorities in cash monies by the courier route … that British Intelligence is conducting their investigation with the assistance of Jamaican informants to the extent that they hope to trap Goldson cold when he is contacted by a courier for a payoff.”

Another paper from the FBI, also dated January 5, 1968, spoke of a confidential source, “an American businessman (who by) virtue of his frequent travel to Latin-American countries is in a position to meet individuals who are closely associated with officials of various national governments in Latin America.” This “source” was also in Belize during the Christmas holidays of 1967, and he “received information that Philip Goldson … is suspect by British officials as a result of certain recent actions”; “for example, it is reported that Goldson, during his recent visit to London, England, told acquaintances there that leaders in the United States and London were engaged in a twin conspiracy to turn Belize over to Guatemala.”

Belizeans recall that Cuba was in the forefront of support for Belize when our government lobbied the United Nations to support Belize’s Independence. We are forever indebted to Panama’s Omar Torrijos, Nicaragua’s Daniel Ortega, Cuba’s Fidel Castro, and the leaders of the Caribbean bloc, for without them Belize would never have realized September 21, 1981. That we marched into statehood as a full member of the United Nations, with all our territory intact, is testament to the fortitude and the determined leadership of heroes like Philip Stanley Wilberforce Goldson. The irony of these fifty-year-old FBI documents, which accuse Mr. Philip of a Cuban connection, is that it was Mr. Goldson’s political opponent, the PUP’s Rt. Hon. Price, who sealed the Cuban support which was so vital in Belize’s successful journey to political independence and territorial integrity.

Facebook
Twitter
Pinterest
WhatsApp
Print
Previous articleVerdes, 1-nil, over Bandits in game 1 of PLB Finals; game 2 “for all the marbles” on Saturday at Isidoro Beaton
Next articleThe FBI has identified a “person of interest” in the murders of American Francesca Matus and Canadian Drew DeVoursney in Belize