COROZAL TOWN, Mon. Nov. 15, 2021 — The Football Academy of Corozal (F.A.C.) officially launches its Phase 2 of the academy. The Football Academy focuses on grassroots development and targets kids of ages 5 to 12 years. The Phase 2 is catering for 50 kids that are divided into four different categories, i.e. U6, U8, U10 & U12.

On Saturday, November 13, we officially launched the second phase of the academy. It all started with a brief ceremony where we were accompanied by coaches, parents, stakeholders and invited guests. The Academy chairman Mr. Jose Mai welcomed everyone, followed by His Worship Mayor Rigo Vellos who gave his remarks to the kids and applauded the step the academy is taking with football in Corozal. Mr. Earl Jones, FFB General Secretary also gave a few remarks on behalf of President Sergio Chuc. 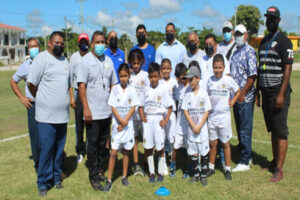 The Academy’s second phase is possible thanks to the continued partnership between the Corozal Football Association, Corozal Town Council, Corozal Sports Council and the Football Federation of Belize. We also take this opportunity to acknowledge the Taiwan Embassy and the Ambassador His Excellency David Chien for his assistance towards the academy. The second phase of the academy will run for ten weeks, every Saturday from 9:30 a.m. to 11:30 a.m. at the Civic Center.