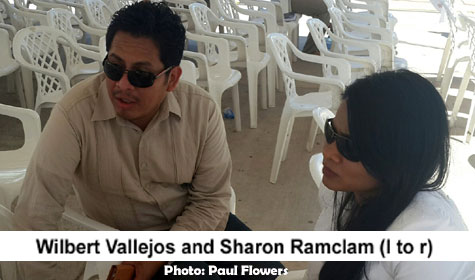 BELIZE CITY, Fri. Mar. 20, 2015–Lands Commissioner Wilbert Vallejos and Chief Executive Officer in the Ministry of Natural Resources Sharon Ramclam told Amandala today that Lands authorities have calaled on the police to investigate five recently unearthed cases of lands fraud – all for parcels of land in the Placencia area, including a parcel on public lands which should form part of the buffer zone for a protected area – after persons showed up at the offices of the Lands Department over the past two weeks with documents which proved to be fake – documents for which they could find no authentic transactions in the Lands Registry.

Five cases over the span of two weeks represent an anomalous spike, as Vallejos told us that between 2011 and 2012, they found a total of about a dozen cases of fraudulent land transactions – which were similarly turned over to police for investigation.

In some of the recent cases, the documents appeared to be very authentic, and even had the official seal, with a raised imprint on the purported Lands document. Lands authorities believe that there is one person behind the recent cases of fraud, although no suspect has yet been named.

Ramclam said that they have not yet been able to ascertain whether the persons who presented the documents to the Lands Department themselves knew of the fraud or were innocently victimized in the process. The officials are looking at all angles, including the possibility that there may be some internal collusion from an accomplice within the Department.

On Thursday, the Ministry of Natural Resources issued a sort of “buyers beware” notice, saying that fraudsters have been using fraudulent international passports and other forms of identification to usurp the identity of real landowners to obtain property and subsequently proceed to fraudulently transfer land titles to prospective buyers by forging signatures of officials in the ministry.

However, when those buyers turn up at the Lands Department to pay their land taxes, sometimes because they are planning on reselling the property, the Department then finds out that the deal was a fraud. In relation to the recent cases, the Lands cashier was unable to find any record of the documents in their system, said Vallejos, who added that the police were then put on alert.

CEO Ramclam recalled that in late 2010 to early 2011, a fraudulent land transaction was brought to the attention of Lands authorities involving the transfer of an island property, and in that instance, signatures were also forged.

Certain individuals have been exploiting gaps that existed in the old deed system. However, Ramclam said that with a computerized system now in place, and a very strict vetting process, it is easier to catch up on fraud.

Currently, the Lands Department processes about 1,500 instruments each month.

CEO Ramclam said that the Lands Department and Ministry have already begun to look at implementing further security features, such as using specialized paper to print official documents.

Also, there will be more stringent procedures put in place to verify the identity of persons who are unable to visit the office themselves and personally carry out the transactions, she explained.

A press release from the Lands and Surveys Department recommends that the general public should adhere to the following measures to ensure the legitimacy of land transactions and/or authenticity of land documents: (1) Validate the authenticity of a land title by making a check at the Land Registry; (2) purchase a certified copy of a register to confirm ownership of parcel; and (3) request an abstract of land title from seller and cross reference it at the Land Registry.

It adds that the Laws of Belize are very clear on the perpetration of fraudulent land transactions, which are considered serious criminal offences for both the perpetrators and their accomplices.