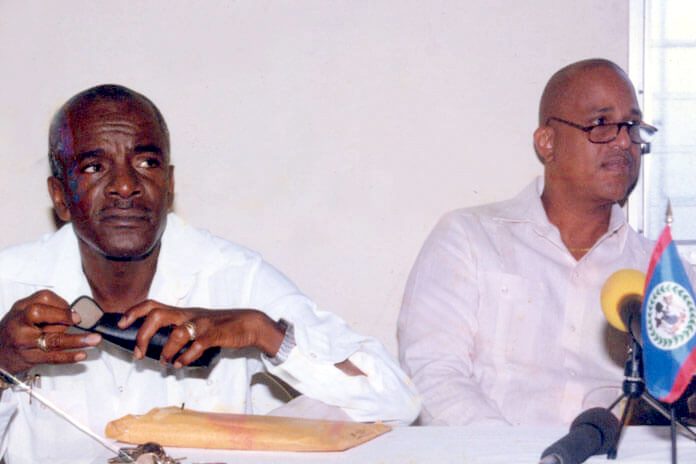 Dean Lindo was a lawyer who was not highly thought of professionally by most of his peers.

He and Joseph Cuthbert Gray shared office premises on Church Street for years. Gray, though a very amoral man, was not only a competent, but a rather brilliant lawyer. I knew Gray to be extremely dismissive of Lindo professionally.

My husband, whom Lindo often appeared before when Sam was working at the DPP’s office along with Ernest Johnson, the then DPP, was highly contemptuous of Lindo as a lawyer. So too was the Chief Justice at the time – Clifford De Lisle Innis.

Dean Barrow, ably supported by Michael Finnegan, has been, overall, Belize’s most powerful Creole politician in the second half of the twentieth century and the first two decades of the twenty-first.

A highly intelligent man, Mr. Barrow knows how to choose his advisers, and when to accept their advice. Few will remember that it was Michael Finnegan who advised Barrow to choose Queen’s Square for his political constituency back in early 1984.

What had happened was that Mr. Barrow had defeated Hubert Elrington in a Collet constituency candidate convention for the Opposition United Democratic Party (UDP). At the time, Collet, which had been represented by the ruling People’s United Party’s (PUP) Harry Courtenay between 1969 and 1984, included most of what is now Lake Independence, Collet and Queen’s Square.

In early 1984, the total of electoral divisions in Belize was increased from eighteen (18) to twenty eight (28), and Collet was split into three – Lake I, Collet, and Queen’s Square. Having defeated Hubert in the original Collet convention, Mr. Barrow was given first choice of the three new constituencies. The thing is, Michael Finnegan had been the campaign manager for the UDP’s Kenneth Tillett in both the 1974 and 1979 general elections, so that he knew Collet like the palm of his hand. He knew that Queen’s Square, where many public officer families were resident at the time, was the most UDP of the three new divisions. He therefore directed Dean Oliver to choose Queen’s Square.

Hubert Elrington was given Lake Independence, and the late Frank Lizama ended up with the new Collet. All three UDP candidates won, although Lake and the new Collet had been considered PUP areas at the time they were created. But, there was a massive voter swing to the UDP in December of 1984 which brought Elrington and Lizama into the House.

In 1985 and 1986, Dean Barrow and I spent some time hanging out with each other, and we had enjoyable conversations, even though we had been bitter enemies (rivals?) through the middle and late 1970s. When Mr. Barrow returned from law school at the University of the West Indies in 1974, I had been in the center of socio-political turbulence from early 1969. Barrow joined Uncle Dean Lindo’s law firm on Church Street, and although he was a deejay at Curl Thompson’s Amara Avenue disco playing conscious Bob Marley music, back then it soon became clear, at least to me, that Dean Oliver was no kind of revolutionary.

The most important, and surprising, thing I learned during my conversations with Dean Oliver in the middle 1980s was that he was not a fan of his uncle, and law firm boss, Dean Russell Lindo. Speculation in years afterwards was that Barrow and Rodwell Williams, another junior partner in the Lindo Church Street firm, were not being well paid, hence their bolting from Church Street to form their Barrow & Williams partnership after the UDP’s 1989 general election defeat.

The thinking in Opposition PUP power broker circles after the UDP victory in 1984, and I can refer specifically to Glenn Derek Godfrey, who used to live two houses down from me in Buttonwood Bay, was that Barrow was in the business of undermining Prime Minister Esquivel so that his uncle, Dean Russell, could reclaim his “rightful place” as UDP Leader. This was definitely not the case. Barrow told me that he held Esquivel in regard and was not impressed with his uncle’s overall performance.

Some people consider Mr. Barrow to be Belize’s first Creole Prime Minister, but Mr. Price, strictly speaking, was probably a Creole. No matter. It’s just a thought. The important thing to understand is that, in order to rise to political power, there are some very important non-Creole and anti-Creole forces which the Creole politician must satisfy that he is “safe,” in other words, that his decision making when he comes to power will not be dominated by Creole interests and concerns.

Dean Barrow committed to UDP electoral politics in mid-1983, then proceeded to top the polls in the December 1983 Belize City Council elections. At what point he was chosen as a personal project/favorite by the business magnate, Barry Bowen, I cannot say, but the late Sir Barry’s understanding with Dean Oliver meant that campaign financing was never, ever a Barrow problem. Later in the 1980s, Mr. Barrow became close with the Santiago Castillo business empire, so he enjoyed the financial muscle support of the two most wealthy business groups in Belize at the time. (Though he entered Belize’s business world in 1985, Lord Michael Ashcroft did not really begin to flex his muscles until the early 1990s.)

Dean Barrow’s dad and my dad were contemporaries who grew up across the canal from each other between Regent Street West and Water Lane – Southside for real. But Dean, his dad’s first child, is four years younger than I, my dad’s oldest. We never had a childhood or young boy relationship befitting two friend’s oldest sons, and did not get to know each other a bit until he returned from law school in 1974. By that time, our differences in personalities and directions had begun to show.

Dean Barrow was not supposed to be in electoral politics as such, but he was an eligible bachelor trophy on social display for the UDP during the years (mid/late 1970s) when the UDP’s popularity in Belize City’s streets was awesome. Barrow was the star at the old capital’s most sensational night spot – Melting Pot.

Anyway, the years at Lindo’s law firm in the 1970s were like a political internship for Dean Oliver. He was learning from the best – Dean Russell and Michael Finnegan.

A man who pays meticulous attention to his attire and appearance, Barrow appealed to that class of Creole people who treasure those attributes. He is the undisputed master of television communication and politicking.

Even though the late 1970s were years of socio-political revolution around us in Nicaragua and Grenada, and across the ocean in Iran, there was never anything suggesting “boat rocking” where UDP philosophy was concerned. From my perspective, Dean Lindo’s UDP seemed like a Belizean version of America’s Republican Party.

Anyway, I’m going to close with a story which is classic Barrow, to my mind. All indications were that the building contractor, Sir Andie, would have been the Opposition UDP’s Belize City mayoral candidate in the 2006 municipal elections, at a time when the Social Security Board (SSB) and Development Finance Corporation (DFC) scandals, not to mention the G-7 Cabinet rebellion, all of which had occurred in 2004, had doomed the ruling PUP to future defeat.

I rate Sir Andie as one of the greatest Belizeans ever. I had seen the PUP itself push him aside as a candidate for the 1980 CitCo election, when the PUP was sure to win, and I was probably more angry about that than Sir was. He is a man of equanimity. His “mistake” had been sponsoring Pulu Lightburn’s basketball Happy Homebuilders, and defeating Sir Bowen’s Belikin Wheels. This is Belize, Jack.

How Sir ended up with the UDP, I don’t know the time line or the details. All I know is, I was sure he was going to be a great Mayor. He deserved the opportunity. But Dean Barrow, the Opposition UDP Leader, got a chance to have the glamorous Zenaida Moya be the UDP’s Belize City mayoral candidate, and Barrow will also choose glamour over anything else. I’m just saying. Once again, Sir was pushed aside.

In closing, it must be said that in politics, winning is everything. And Dean Barrow has been a winner, ever since 1983 CitCo. He’s never been defeated as an individual. The UDP has lost with him as one of their leaders, and with him as their Maximum Leader in 2003, but he himself has never been beaten individually. That is something no other Prime Minister of Belize can boast. Hence, Dean Oliver deserves large respect for his accomplishments.

If there was a rivalry between him and me, then history must surely vote the multimillionaire Barrow the winner, outright. The question for us Belizeans remains, nevertheless, what happened to the Creole people meanwhile all the Barrow successes were taking place. I don’t understand this. Call me stupid, if you will, but I just don’t get it.