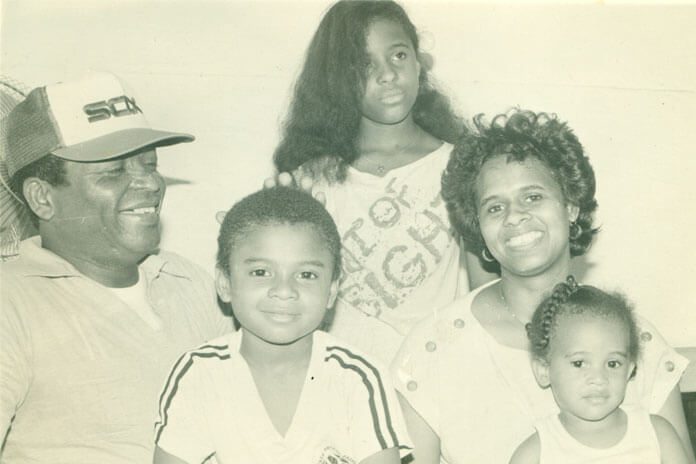 On the occasion of Garifuna Settlement Day 2019, I’d like to pay my respects to two outstanding Garifuna gentlemen – Cliff Augustine, who is presently in Chicago fighting with kidney disease, and Cornelius “Pat” Cacho, who lives in Florida and recently became the University of Belize’s greatest benefactor. Cliff celebrated his 80th birthday while in Belize for this year’s September celebrations, and Mr. Cacho has to be in his nineties.

Cliff Augustine, a native of Hopkins, left the Roman Catholic priesthood to marry Elma Whittaker, a graduate of Pallotti High School who worked for a while at Amandala and was also an officer in the last UBAD executive in 1974. Theirs has been the greatest love story I have ever seen.

I knew Elma from the time when I lived briefly on Waight Street in the Yabra area of Belize City. This was in 1970/71. I was the UBAD president, and this was a period during which I was tried in the Supreme Court twice within six months. Stress. I would pass two families on my way to town on bicycle who were especially friendly to me – the Smith family (which included the late Beverly Smith and the baby, Orel) and the Whittaker family.

Incidentally, Elma earned a Ph.D., in clinical psychology I think, while she and Cliff have been living in Chicago. They probably moved to Chitown in the 1990s, because I remember Cliff being active and prominent in the banana industry in the 1980s.

Cliff Augustine is a fine gentlemen with an extraordinarily pleasant personality. I think it was on this last visit this year that Cliff, for the first time ever, expressed some Garifuna sentiments to me. He pointed out how brave and independent in thinking and behavior his people had been historically, and contrasted the Garifuna struggle with how relatively submissive the Creole people had been to British colonialism. Please understand, I don’t remember his exact words, but there was absolutely no hint of disrespect to me, as a Creole, in his words. I had no choice but to agree with his sentiments.

I am one of the few Belize City Creoles from my generation who was not raised with feelings of discrimination against Garifuna people. I suggest this was partly because our family was Roman Catholic, and because of our father, who had a close relationship with Mr. Cacho from their teenaged days, and also had a Garifuna teammate on the All Star football team by the name of Joe Mendez, whom my dad held in great regard.

A bit of background to the All Star business is required here. Around 1943, 1944, the late Arthur “Artie” Barrow, the father of our present Prime Minister, put together a senior football team with all the best players from the Belize City high schools of the time – St. John’s College, St. Michael’s College, and Wesley College. He named the team “All Star.” All Star won the football championship here in 1944/45 and 1946/47. My dad, from S.J.C., was the center forward on that team, while Mr. Cacho, from St. Michael’s, was a sturdy defender.

I remember my mom, some years ago, mentioning to us that Mr. Cacho was one of the Garifuna people who was expressing Garifuna pride from way back when, before Garifuna pride became the order of the day. Pat Cacho became a brilliant technocrat in the Ministry of Finance in the late 1950s and early 1960s, but migrated to the United States. At the time, the talk was that he was being discriminated against in favor of the late Rafael Fonseca in the Ministry, but in an interview with Adele Ramos in this newspaper perhaps six or seven years ago, he denied that that had been the case. Whatever, Mr. Cacho became so successful as a technocrat with the World Bank that he was in a position to donate a quarter million dollars worth of scholarships to UB. Big time respect.

Richest blessings on the Garinagu on the occasion of Settlement Day 2019.