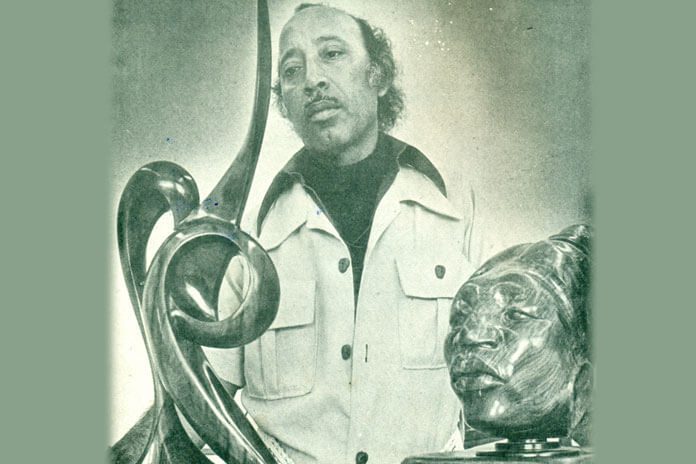 (Ed. NOTE: This article was originally published in the November 1979 issue of Fun & Games magazine, an effort by the Amandala organization (Cream, Ltd.) which lasted for only six months, but which produced several masterpieces which will have historical value.)

George Gabb is 51 years, a poet, playwright, sports enthusiast, member of the British Empire and of course Belize’s most famous sculptor.

To use some words from the British Empire’s most famous playwright, William Shakespeare, some men were born great, some had greatness thrust upon them others had to achieve greatness.

George Gabb certainly wasn’t born great, nor was greatness thrust upon him, but he achieved greatness.

Throughout Belize the name George Gabb is synonymous with wood-carving and zericote, a special wood he calls black gold.

Gabb was born in Belize City on February 28, 1929. He spent a lot of his childhood on a piece of sculpture carved by the gods in the waters of Belize – Half–Moon Caye. It was at Half-Moon Caye that the young artist began appreciating beauty and started experimenting with the art of making things with his hands.

During his trips to Belize City he sold his handicrafts of hawksbill and other shells. This little sideline gradually evolved in to a small industry and Gabb developed it by working wooden bowls, zericote sailboats, and cowhorn birds.

Hurricane Hattie flattened the fledgling industry in 1961 and Gabb, like most other Belizeans at the time, had to make a fresh start. This time, however, a new side of Gabb started emerging. No longer was he content to make objects for commercial purpose. Something inside this man was itching, the creative animal was clawing to come out. Gabb discovered his creative self.

He recalls his first exhibition. “It was sometime in 1962. Upstairs of that house at the corner of Dean and Regent Streets. Among the people who attended was the then British Consul. He was sufficiently impressed to arrange a bursary for me to study art in England for 1 ½ years in the first instance.”

“I thought I would learn various techniques, even get some practice in metals. Bu it was just an experimental sort of thing and the allowance was small for a man with a family.”

To the surprise of some of his friends Gabb turned up in Belize after three months in the U.K. The exposure of meeting fellow artists and England’s best – Sir Henry Moore – did make an impression.

Shortly after his return he turned out his first masterpiece TRIUMPHANT CHRIST which still hangs triumphantly at St. John’s College in Belize City.

A few years after his U.K. experience, says Gabb, he began feeling the urge to write. It is here that another George comes into the picture or rather writing to be exact.

George Cadle Price, Premier, was carving Belmopan out of stones and rocks in the heart of Belize. George Price commissioned George Gabb to carve the heart of his dream, the Belizean man, to be placed in the legislative Building in the new Mayan City that was then being built.

Gabb explains – “I thought deeply about this work. How to bring out a Belizean Man in wood. Who is the Belizean Man? He is not Carib, not Mayan, not Creole, not Spanish, not any of these; but all put together. What was his colour, what were his features? What I usually do when undertaking a major piece of sculpture is to write down my impressions and thoughts connected with it and this is how ‘Ethnic Soul Song’ came about.”

And what became of the Premier’s Belizean Man? He was never born. “I figured I couldn’t do with wood what I had done with words. I no longer felt the urge to create in wood what I had captured in “Ethnic Soul Song.”

A lot of these and countless smaller works have quietly gone abroad into private collections much to the sorrow of their creator.

Gabb’s most successful exhibition was recently held at the Colonial Governor’s House from the 20th to 28th September. It was seen by thousands of admirers from all over the country and was widely acclaimed in every section of the local news media. What is the story behind taking the exhibition to the Governor’s House?

“Originally I had planned for the exhibition to be held at the Bank of Nova Scotia on Albert Street but there was some hesitation on the part of the Manager, so I began seeking another place.

“It was also my intention to have the exhibition opened by Mr. Vernon Leslie (Resident Tutor of the University Centre) but he was out of the country at the time. A good friend suggested another person whom I had no objection to, except that I didn’t want any politician to open the exhibition. You know how it is with politicians from both parties. They tend to use people and occasions for their own purposes and I didn’t want my exhibition to be used. I have a top brass friend in the British Army who always visits my workshop and I asked if he thought the Governor would agree to open the exhibition. He offered to approach the Governor. Word later reached me that the Governor had agreed but wanted to know why I didn’t approach him myself. Even up to this point I still hadn’t found a place for the exhibition. Anyhow the Governor and I met and we talked. I found him to be a gentleman and quite cooperative. While we were discussing in his house my eyes started wandering around and it came to my mind, well, why not use the place? It is only being wasted and not used to its full extent. It is part of our history; a lot of decisions must have been made there that affected our people. And of course, most Belizeans have never been in there. I am one of the four hundred and odd offspring of my father that had an opportunity to go in there when I was awarded the M.B.E. in 1974.”

F&G: How did you get to become a Member of the British Empire?

Gabb: One day the late Financial Secretary and Acting Governor Mr. Rafael Fonseca called me to say I was being offered the M.B.E. for my contribution to the development of the Arts in Belize. It was a kind of shock, a pleasant surprise to me and I thought, well, if my people see it this way and Her Majesty the Queen sees it this way, who am I to say no. So I accepted.

F&G: You are not suggesting any liking for colonialism or the lingering colonial ties, are you?

Gabb: No. I have explained how it was accidental that the Governor House came to be the venue of the exhibition.

F&G: On behalf of FUN & GAMES let me offer congratulations on your successful exhibition. Where do you go from here?

Gabb: There are tentative plans to take the exhibition to the U.S.A. I am not getting any assistance from anyone; I would like to make that clear. For myself I feel like I have just began to carve. Many new ideas are coming to me and I think I could be entering a new phase in the business.

F&G: Is there still a problem for carvers to obtain the zericote wood?

Gabb The problem is getting worse and there is evidence that zericote is still being exported despite official denials. It is my strong feeling that the woodcarvers are going to react violently as this situation becomes more acute.