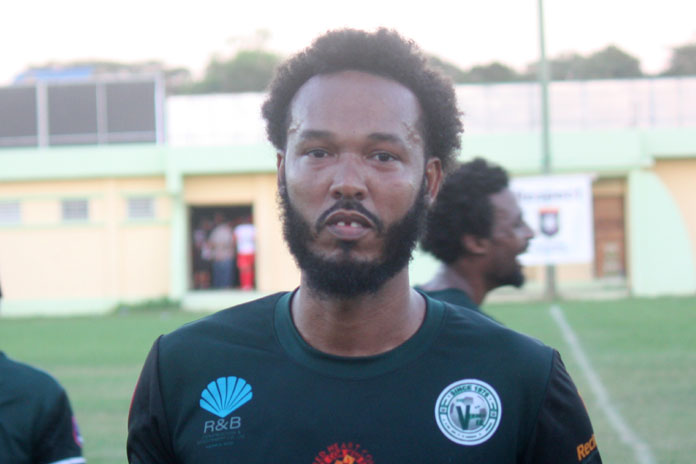 BELIZE CITY, Mon. Mar. 2, 2020– We are 1 game into the second round of the double round-robin tournament of the Premier League of Belize (PLB) 2019-2020 Closing Season, and the race to the 4-team semifinal playoffs is heating up, as 6 teams are still realistically still in the race. Only a miracle can help BDF FC, who have only 1 point from their 6 games played so far; so it seems that Belize District fans will be joining fans of the Orange Walk, Corozal and Toledo districts, who have no hopes of seeing PLB playoff action this year in their home stadiums.

While the scramble for the 4 playoff spots gets rougher each week, the matter of the CONCACAF League berth is still unsettled, as Bandits Sport remains within striking distance of defending champion Verdes, who enjoyed a 5-point lead in the Opening Season regular season (33 to 28). With 5 games remaining for each team in this Closing Season, and Verdes showing a 2-point edge on the Bandits (see current standings below), that makes a combined 7-point gap that Verdes has on the Bandits; a tall hurdle for the Bandits to climb against a Verdes team that is still undefeated in this tournament. And the Verdes management is taking no chances, having just reinforced their aging back line with former BDF sweeper, Blake Tejeda, and former San Pedro Pirates outstanding flank defender, Brazilian Mailson Moura. With Honduran Georgie Welcome, Argentinian Facundo Garnier and if they get back Mexican Hector Martinez, Bandits have the strongest attacking front line, with the two leading goal scorers, Welcome with 8 and Garnier with 7; while Verdes’ offense has only produced a total of 9 goals so far from 7 games played. Indeed, it was the veteran Jerome “Jarro” James who came off the Verdes bench late yesterday to pull out the 1-nil victory against a sprightly, young Altitude team.

In the only Saturday night game over the weekend, the amazing San Pedro Pirates FC, who shocked the Bandits 3-2 a week earlier, made it a 3-game winning streak, as they stopped the visiting Wagiya SC, 2-0, with a second consecutive brace from midfielder/striker Jesse Smith (33’ & 45’). Jesse had also struck twice in their victory over the Bandits. Before the Bandits, the Pirates had registered their first victory of the season, 2-1, over BDF, who are winless so far.

It was a highly anticipated return clash in Placencia yesterday, where Placencia Assassins FC has been anything but a pushover, following their season opening 11-nil disaster against Bandits Sport. Rebounding with a protest victory over BDF, followed by a series of impressive showings that included draws against Verdes and Wagiya, and a victory over the Pirates, the Assassins were in a position to leap into second place yesterday if they could secure a revenge victory over the Bandits. But it was not to be, as the Bandits came away with another shutout, 3-0 this time, with a first half penalty conversion from Georgie Welcome (23’ PK) followed by second half goals from Elroy “Bibbs” Kuylen (59’) and Evan Mariano (75’).

The other Sunday game provided some high drama at the Norman Broaster Stadium, where two undefeated teams, home standing Verdes FC and visiting Altitude FC from Independence remained scoreless late into second half. A clearly accidental hand ball from a bad bounce at the edge of the eighteen had allowed referee Amir Castillas to award a penalty in favor of Verdes at the 37th minute; but, thankfully, Altitudes’ Argentinian goalie Julio Ortiz distracted Verdes’ Trimayne Harris enough to end up deflecting Harris’ down-the-middle grounder with his leg after diving to the right corner. It was a weak penalty call, though, and would have spoiled a very good game. As it turned out, two second half substitutions by Verdes coach Cesar Martin combined to produce the game winner. Veteran goal-getter Jerome “Jarro” James replaced midfielder Collin Westby at the 65th minute, and hard working striker Krisean Lopez was replaced by fresh legs in the similarly speedy Renteria at the 77th minute. Renteria made two cross goal centers, the first just out of reach of the advancing Jarro; but the second, at the 87th minute, was “on the money,” as the tall Jarro nailed a ferocious header high into the left corner. Gooaaaal!! The jubilant Jarro accepted the yellow card for his shirt removing celebration, but nobody cared; Verdes, 1-nil, over Altitude.

This is shaping up to be one heck of a run to the playoffs, as fans can count on the proud warriors of the struggling BDF to spoil somebody’s playoff dreams.