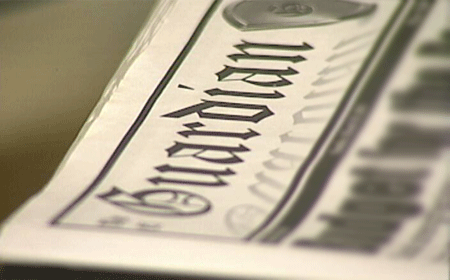 BELIZE CITY, Fri. Oct. 6, 2017–This is really getting ridiculous, people! But it is also sad, and damn disgusting, when you consider that the same people, our Prime Minister and his UDP Cabinet, who call the shots and decide that we must pay almost twelve dollars for a gallon of gas, are the same people who sometimes spend our tax dollars like it’s a “free for all.”

Now, everybody knows that both PUP and UDP abuse the system when they are in power, and one of the ways they do so is by sending lavish advertisements to their party political organs, which are officially registered as newspapers.

We wish both of them, PUDP, would “stop it.”

But this week, the situation has gone too far.

Now, everybody knows that there is the Amandala, then there is the Reporter, both being regular newspapers. Then there are the political organ/papers – the UDP’s Guardian and the PUP’s Belize Times.
If you want to get the word out to the public, and you think it is expedient to put your advertisement in only two newspapers, then you would choose where you get the most “bang for your buck.” At least that is what responsible, frugal people in charge of spending other people’s money would do.

Pan-American Day, which used to be “Columbus Day,” is not a very big deal in Belize, although it is still a public and bank holiday. And we Belizeans like our holidays. So we enjoy our day off from work. But most businesses don’t bother to do much public advertisement in newspapers, which comes at a cost, for Pan-American Day. Except for Atlantic Bank, whose roots are in Central America, no local business house bothered to send any “Happy Pan-American Day” wishes to citizens through advertisements in this weekend’s newspapers. Atlantic Bank had a quarter page ad in both Amandala (Insert before page 49) and Reporter (on page 4), but none in the political organs, The Guardian and The Belize Times.

While there certainly will be some form of festivities making use of the holiday, the PUP didn’t pay much attention to Pan-American Day in today’s issue; and there were no ads in that regard in their paper, the Belize Times.

But, hey; the Guardian did. And did they, people?!! I guess they will say, “It’s our turn now” to fleece the Belizean people.

Of course, who are we to say that those area representatives and mayors, who were so hyped up about Pan-American Day, didn’t dig into their own pockets and send the money to the Guardian for their full page ads in today’s paper? In all, we counted fifteen (15) full page ads and two half page ads for “Happy Pan-American Day” advertisements in this week’s Guardian. But there was one noticeable exception among them, and that’s why we said, “The situation has gone too far.”

What do Atlantic Bank and the Belize Airport Authority have in common?

We know that Atlantic Bank has its roots in Central America, and so they apparently pay special attention to Pan-American Day. So, they put quarter page ads in Amandala and Reporter.

But, what does Pan-American Day mean to the Board members of Belize Airport Authority, that they feel the urge to purchase, not just a quarter page, but a full-page “Happy Pan-American Day” ad? And where do they put the ad? Not like Atlantic Bank, in the Amandala or the Reporter; no, the full-page ad from Belize Airport Authority appears ONLY in the Guardian (Insert 5, The Guardian, Sunday, October 8, 2017).

This is sinister, and warrants an investigation. This is our hard-earned tax dollars being spent here, people! Are we getting value for money, or is our money being used to finance the UDP party, through wasteful paid advertisements to its party political organ – the Guardian “newspaper”?

Incidentally, the last time the Belize Airports Authority (Google “Belize Airport Authority”) caught my attention, it was concerning a scandal back in 2014, when Prime Minister Barrow reportedly declared that the Board’s actions were “distasteful, but not corrupt.” Nevertheless, bowing to public pressure, the whole Board then resigned, and was replaced by a new Board of Directors that, according to one media report, “reads like a who’s who of U.D.P. insiders.”

So, where are we now? “Distasteful or corrupt;” any which way, we the taxpayers must still pay the bill. The legendary Caribbean calypsonian/philosopher, The Mighty Sparrow, sang, “Somebody is betraying we; somebody we trust completely. Could it be all them Ministers? Could it be them labor leaders? It could be so; but, we don’t know…” (Play it for us, J.C.)

I see where Brother Paul Rodriguez chastised the Reporter editorialist for supporting the candidate for the Democratic Party in the US, because, Brother Paul...
Read more
Features

The Effects of COVID-19 For the long October 12th weekend, my family and I went down to La Isla Carinosa — the beautiful island of...
Read more
Features

“Pity the nation whose people are sheep And whose shepherds mislead them… Pity the nation, oh pity the people Who allow their rights to erode And their...
Read more
- Advertisment -