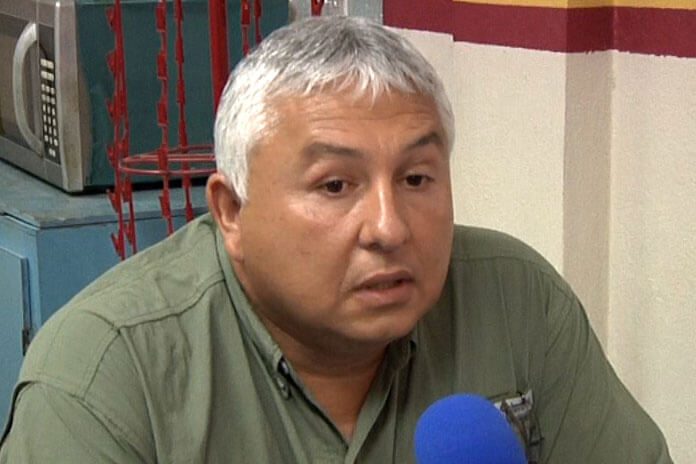 BENQUE VIEJO DEL CARMEN, Cayo District, Thurs. Nov. 14, 2019– The Guatemalan claim to Belizean territory has once more created an international incident along the border between Belize and Guatemala. This time, the cause of the problem is a group of Guatemalans who are squatting on private land in an area known as Barrio El Juda.

Earlier this week, Minister of Foreign Affairs, Hon. Wilfred Elrington, as he usually does, urged patience so as to give the necessary time for diplomatic efforts to work.

Belizean landowner Jorge Emilio Espat, made a trip to the area today and took the media along as witness to what has been happening on his land for several months now.

The few hundred acres of land that is Espat’s property lies across the Mopan River and is located behind the Benque Bus Terminal. Guatemalans have settled along the border line and have built houses on Espat’s property.

There are about 30 Guatemalan families in the area, and they know that the strip of road that separates them is Belizean territory.

Espat said that the Guatemalans use the area as a garbage dump and that a lot of illegal activities take place in the area, including the extraction of natural resources.

According to Espat, the Organization of American States has deemed that about 10 lots occupied by the Guatemalans are on Belizean territory. Espat said that the OAS representative has been to the area along with him.

“They have actually indicated to me that they know that the land is in Belizean territory,” Espat told KREM news editor, Marisol Amaya.

The houses that were built in the area are about 60 meters inside Belizean territory, according to the OAS estimate.

Some of the Guatemalans have indicated that they have title to the lands dating back to the year 2000; some say they have possession rights, and some others say they have no ownership documents, but are waiting for the Melchor municipality to survey the land and subdivide it.

The Guatemalan squatters are insisting that they are in Guatemalan territory and whatever dispute exists, must be resolved by the authorities of both Belize and Guatemala.

One Guatemalan resident of the area, speaking to KREM News via translation, said that the OAS has come and told them that the issue is pending resolution and that papers will be taken to high-level government officials, because it will be the governments that will resolve the issue.

“There are two to three property deeds and some people have property rights,” the Guatemalan resident said.

The resident added, “We can’t do anything. So, we need the mayor of Melchor to come and speak to you about property rights, because we are farmers and we can’t be fighting with you or sharing information, because we don’t know how the government has those documents. As far as we know, there is no specific line for Belize, because no agreement has been reached, because this part is still a part of the municipality.”

It is obvious that Espat cannot move the squatters by himself. He said it is very risky, because of course, they will put up a fight.

“There again, it’s sad, because we don’t have the assistance from government, the backup, the support, even though it is registered land,” he said.

“By myself, I can’t make a stand, and of course, to try to make a final solution. We, as the people of Belize, must make a stand. It is happening here, and it might happen further down the road. Once we are at ease, it will continue to happen,” Espat commented.

Espat added, “I hope the government can intervene as quickly as possible. They say, as you all can see with the press release, they are trying to do their part. And I understand, it takes time, through diplomacy. But the longer we wait, the more incursions, and at the end of the day, more buildings are erected, and more people are coming in. So, it’s something that we need to move on quickly.”

Since the Government of Belize and the OAS have become involved, the most recent construction has ceased, but to get the squatters out is another story.