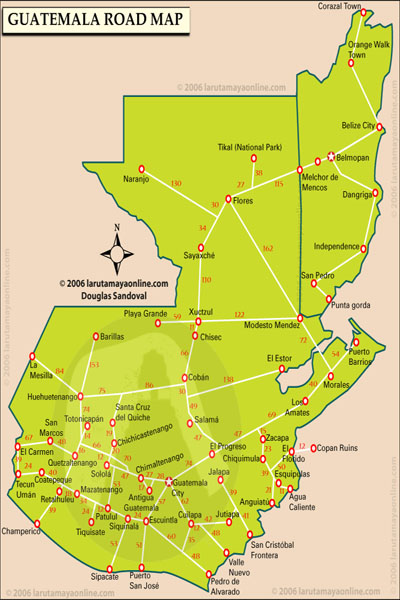 Resurgence of controversial maps, a response to ICJ process

The continued use by Guatemalans of a national map annexing all of Belize as their territory is causing quite a stir on the international front, as Belizeans continue to protest the use of what Belize officials describe as an “offensive” map that clearly does not respect Belize’s land borders.

Alexis Rosado, Chief Executive Officer in the Belize Ministry of Foreign Affairs, told Amandala today that Guatemala stands alone across the entire international community, since no other country uses the annexed map to represent Belize and Guatemala, but they all recognize Belize’s land borders.

We asked the CEO: What can Belize do to have the map corrected? He pointed to the juridical process at the level of the International Court of Justice (ICJ), which, he said, would put an end to this once and for all.

Asked if Belize could seek the passage of a formal resolution from the international community at the upcoming Organization of American States (OAS) General Assembly in June in Antigua, Guatemala, CEO Rosado said “even if they wanted to do it, I don’t know that they can do it.”

Belize’s Ambassador resident in Guatemala, H.E. Alfredo Martinez, said, “Quite frankly, it is no easy task and there is no quick solution to the problem. However, Belize consistently is on guard and protests at every turn when these situations arise.”

Ambassador Martinez said that there have been many instances, especially as they relate to private organizations, where Belize’s protests have resulted in the correction of the maps, which he describes as “offensive.”

“Two very important organizations, the Chamber of Industry and the National Evangelical Association, for example, changed their logos which had the map,” the Ambassador said.

As a backdrop, the Ambassador explained that the annexed map has been used in schools for decades but “…some organizations and even some government departments have not yet ‘graduated’ into a more progressive mentality; so it is a gradual process of weaning away from what they have always been used to.”

The Ambassador said, “…there is NO official government policy, as far as we are aware, that mandates the use of the map that includes Belize, and therefore very slowly, successive governments of Guatemala have stopped using the offensive map when official publications are done.”

However, the use of the controversial map by a Guatemala delegate at an OAS meeting last month led Belize to lodge a formal protest via a diplomatic note.

Guatemala has not given an undertaking to discourage the use of the map. According to CEO Rosado, who agrees that the use of the map by Guatemala with all of Belize annexed is “clearly offensive,” the Guatemalans responded by saying that the map was “inadvertently used.”

Ambassador Martinez told our newspaper that, “When organizations or government departments question what to do, the Ministry of Foreign Affairs of Guatemala would refer them to the [now defunct] Comision de Belice for guidance.”

That Comision would issue instructions that there is only one map—one which includes Belize, and they would proffer a sanctioned copy, with the borderline with Belize showing an annotation saying: “territorial differendum pending.”

The Ambassador said that this protocol has not always been followed; instead, he notes, “…some government departments have moved away from that suggested map and more so from the more offensive one showing no border line with the annotation.”

Things changed after the signing of the Special Agreement in 2008, the Ambassador detailed.

He said that “…after the signing of the Special Agreement, opening the possibility of the dispute going before the ICJ, the Comision as of 2012 seems to have stepped up its campaign for the use of the annotated map including Belize.”

Guatemala, in effect, has been trying to safeguard its legal position, “just in case Belize presents as evidence against them at the ICJ, the official Guatemala maps without Belize to show that the Government of Guatemala has tacitly recognized that Belize is not a part of their territory as they claim.”

Belize’s stance is that the use of the map does not help Guatemala’s case.

“This government of Perez Molina has not, it seems, issued any directive, for or against, as we see some government departments use the map without Belize and some continue to use their old logos,” the Ambassador explained.

On Friday, Guatemala’s president Otto Pérez Molina made public comments lamenting the decision of Belizean basketball authorities to withdraw from sporting events in Santa Elena de Cruz, a department of Peten, because of the federation’s use of a logo that includes Belize in a map of Guatemala.

The president was quoted as saying that Belize’s actions are going to cause difficulties with the process of arriving at a peaceful solution to their problems with Belize. He went on to say that there are groups in Belize trying to impede the negotiations, but the Guatemalan government is still prepared to negotiate.

The bulletin ended by citing a caution from Pérez Molina to sectors of both countries against torpedoing the negotiations.

CEO Rosado said, however, that there are “no negotiations”—negotiations are over, and the agenda now is looking forward to the October 2013 referendum on the ICJ, which he, too, says will bring a positive and final solution for Belize.

Ambassador Martinez said “…it is a never-ending episode which we do not control as long as the claim is in their constitution and the hardliners have their say….”

One of Guatemala’s premier travel agencies uses the map: Mayan Travel on its larutamaya.com website furthermore uses a map of road networks that run across Belize and Guatemala, with no borders separating the two countries.