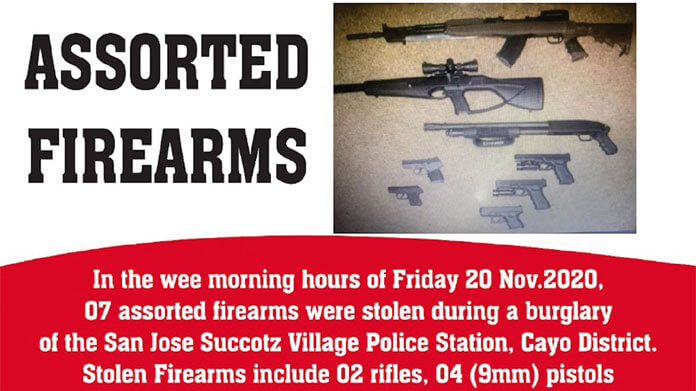 Burglars breached one of the windows and were able to get into a metal firearm safe and steal seven service weapons, which included two high-powered M4 rifles K3B, one pump-action shotgun and four 9mm handguns.

ACP Joseph Myvett, Head of the Crime Investigation Branch, said that an officer resides upstairs the sub-station, and that, as part of their enquiry into the events that led to the burglary, “the police officer residing upstairs will have to be detained and interviewed.”

He further stated that the burglars gained entry by removing louvers from a window, and that “there are parallel investigations being carried out, that of a criminal investigation and an internal investigation, to see what policies, if any, were not followed, or not being adhered to.

“We do have a named suspect in relation to this investigation whom we are seeking, and we are following several leads. We have obtained surveillance footage from nearby areas which we are in the process of reviewing,” said Myvette.

Crime stoppers Belize is offering a $2,000 reward for information leading to the recovery of the firearms. Call 922 or use the P3 App at www.P3tips.com to share information.