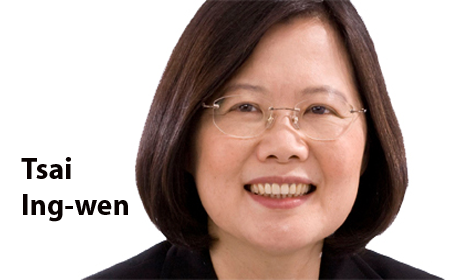 BELIZE CITY, Thurs. Jan. 21, 2016–Almost 10 million voters from the island of Taiwan went to the polls last week in what has proven to be historic elections in that country, with the election of the first woman to the presidency, the country’s highest office, as well as the first ouster of Kuomintang – KMT from the country’s legislature.

“Taiwanese people have used their ballots to make history,” said Tsai Ing-wen, 59, chairwoman of the Democratic Progressive Party (DPP), who garnered 6.89 million votes (or 56.12%), beating KMT’s Eric Chu by a wide margin of about 80%.

Chu won 3.81 million (or 31.04 percent), according to information published in Taiwan Today, the news agency of Taiwan’s Ministry of Foreign Affairs. He stepped down as party chairman after conceding defeat.

Meanwhile, the DPP won 68 of 113 seats in the Legislature, winning a majority for the first time. KMT won 35 seats.

Tsai is to succeed the KMT’s Ma Ying-jeou, who was said to promote the “one China” policy.

Even ahead of Tsai’s May 20th inauguration in Taipei City, the political landscape in Taiwan is already changing.

The defeat of the KMT triggered the resignation en masse of Taiwan premier Mao Chi-kuo and the Cabinet who will be replaced by vice premier Chang San-cheng, as head of Cabinet, and a new interim team to be installed after consultation with the DPP.

In her victory remarks on Saturday, Tsai, who will be the country’s 14th president, vowed “to strengthen the unity of the country and build a consistent, predictable and sustainable cross-strait relationship.”

The DPP says, “We believe in moving Taiwan forward – towards a strong innovative economy, clean energy, efficiency in government and ensuring that we have [a] fair and equitable society.”

While it does not talk directly about seeking formal independence from mainland China, many Taiwanese voters expect that the DPP will aim to build the nation’s sovereignty in its term of office, even as China, which claims Taiwan as its territory, has in the wake of Saturday’s election results, warned Taiwan against seeking independence.

In the run-up to the election, some voters were incensed over the forced apology of a Korean girl who waived a Taiwan flag in an online video. After Tsai’s victory, her Facebook page was spammed by tens of thousands of pro-China commenters who wrote in a style which connected them with mainland China, against any move by Taiwan to seek full independence—this despite the fact that China blocks social media access by citizens, some of who have been savvy enough to break through what has been dubbed China’s Great Firewall.

It is clear that even as Tsai and the DPP have made history in the 2016 presidential and legislative elections, the president-elect is about to face a daunting political challenge, with great expectations from millions of voters on the home front but stubborn resistance from political opponents in mainland China. She seems determined to prove that a woman can do the job just as well.

(An official source told us that there are about 800 Taiwanese living in Belize.)