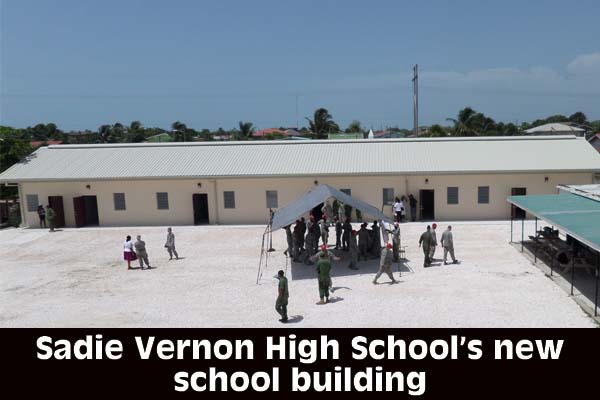 Technical staff sergeant Frank Eastwood, the manager of the building construction, told Amandala that the construction of the building took place within a period of 79 days – starting on April 2 and reaching completion today. The building is of concrete and measures 125 feet long by 26 feet wide.

The construction was a collaborative effort between the United States Army and the Belize Defence Force. There were also elements of the US Air Force and the US Marines.

Eastwood said that building a concrete structure was new to them, because they typically construct metal buildings. Since it was a new experience, they took the opportunity to learn from the Belize Defence Force engineers. He said that it was a pleasure to work alongside the local engineers from the BDF and looks forward to his team’s next deployment to Belize.

Eastwood said that the Sadie Vernon School building is the fifth and final structure they have built and inaugurated.

The New Horizons 2014 is a humanitarian assistance initiative to the country carried out by the Embassy of the United States in Belize in collaboration with the US Army Southern Command.

The New Horizons initiative has constructed community centers, medical clinics and schools in different parts of the country. Also, as part of the initiative, through the partnership of teams of American, Canadian and Belizean medical doctors and specialists, medical treatment has been provided to those in need of care free of cost. The New Horizons 2014 headquarters is located at the Belize Defence Force Camp at Price Barracks in Ladyville, Belize District.