House destroyed on Ring Road in the Lake I area; family suspects arson 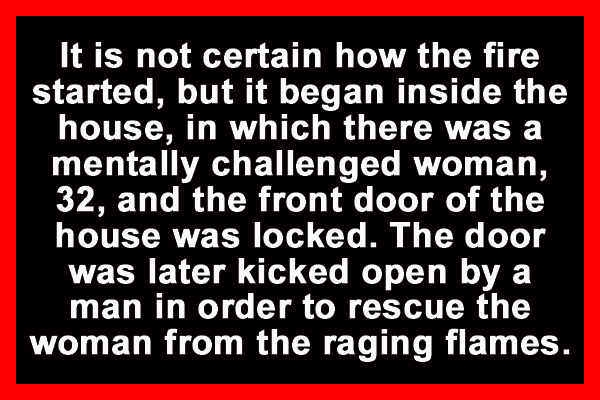 A one-flat timber house and all its furnishings and equipment were completely destroyed by fire at about 11:30 this morning. The house, which was the property of Morris Amos Taylor, 84, of Ring Road in the Lake I area, was one of three timber houses in the yard, but the quick response of the Belize Fire Service confined the fire to Taylor’s house, and the other two houses were not damaged.

It is not certain how the fire started, but it began inside the house, in which there was a mentally challenged woman, 32, and the front door of the house was locked. The door was later kicked open by a man in order to rescue the woman from the raging flames.

A neighbor said that she was in her house sleeping when smoke aggravated her. She opened her door to see what was happening, and that was when she saw the house on fire. She noted that the door of the house was closed.

Another neighbor said that he was at home when he smelled smoke. He looked out to see what was happening, saw flames coming out of Taylor’s house, and quickly called the National Fire Service, but he was told that they were already responding to the call.

He said that within minutes, the fire service was on the scene, battling the fire.

Taylor, who is a musician, had many things of sentimental value to him in the house, from his yesteryears, including his musical instruments that he used to play in places like Bamboo Bay – which he cherished so much.

Amos Taylor, Jr., told Amandala in an interview today that when he went home on Sunday, he saw evidence that a fire had been started in his room. He immediately went to his father and complained to him that someone wanted to burn the house, and told him to get rid of the mentally challenged woman who was staying in the house – whom he suspected was responsible for starting the blaze.

Taylor, Jr., said that all his memorabilia from childhood, his clothes, his children’s belongings and clothing that he had bought to sell were all destroyed.

The National Fire Service has launched an investigation to ascertain the cause of the fire.