Hurricane Delta steered away from Belize 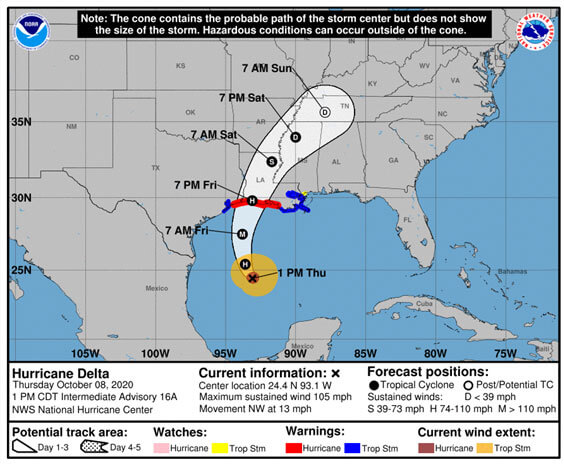 BELIZE CITY, Thurs. Oct. 8, 2020– Hurricane Delta, the 25th named storm of the 2020 hurricane season, made landfall near the tip of the Yucatan peninsula early Wednesday morning as a Category 2 hurricane, with wind speeds of 110 mph, after whipping up winds of 145 mph as a Category 4 storm just several hours earlier. Preliminary reports out of Mexico are that there were no deaths or injuries as a result of the storm, but the hurricane downed trees, and caused flooding and power outages.

Hurricane Delta was dangerously close to Belize for quite a few hours, forcing NEMO to issue Advisory #3 at 10:30 a.m. on October 6, to warn Belizeans that it was a major hurricane, just 320 miles south-east of Cozumel, Mexico. At that time the hurricane was packing winds of 115 mph, and it was traveling west-northwest at 16 mph.

At 10:30 Tuesday morning, October 6, Hurricane Delta hadn’t stirred much anxiety among Belizeans, even though a turn to the west from its west-northwest track would have caused it to impact the Corozal District with all its force in about 24 hours. That had to do with the fact that most Belizeans have developed full confidence in the meteorologists, who had predicted that the storm would continue along the path on which it had been going. Maybe we are also somewhat exhausted from the continued struggle to avoid getting infected by the new coronavirus.

In 1961, the meteorologists weren’t so expert in predicting the path of hurricanes, and as a result many Belizeans in the Belize and Stann Creek Districts were not completely on guard when Hattie “turned like a boomerang” and hammered the country.

Jonathan Erdman, reporting for Weather Underground (on the website wunderground.com) said that Hurricane Delta was the “fastest on record to rapidly intensify from tropical depression to Category 4 in the Atlantic Basin”, going from a Category 1 hurricane late Monday evening to a Category 4 beast late Tuesday morning.

The report says the conditions in the Caribbean were ripe for rapid intensification of the storm. There was a supply of warm water to some depth; there was little or no wind shear, which can rip apart a small storm (until after the storm had gone through its rapid intensification); the atmosphere was relatively moist; and the storm had a tiny core, which allows “for more rapid strengthening than a larger storm.”

The 2005 hurricane season, with 27 named storms, is the only one on record with more named storms than have so far formed in 2020. The hurricane season officially comes to an end on the 30th of November. The weather experts say they don’t expect any new storms developing in the next 5 days.