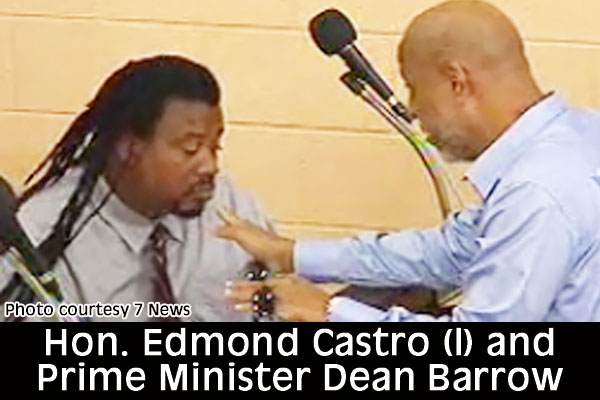 “I have been personally, extremely hurt … when … I have to defend … behavior that is the opposite of straight, my personal credibility takes a great hit. So, I am distraught on behalf of my party, and I am distraught on my own behalf … Ultimately, if I have to take more actions … triggering elections … I must live with the consequences, which would no doubt be a loss of the consequent general elections.”

Prime Minister Dean Barrow, Leader of the ruling United Democratic Party (UDP), is grappling with major political trouble with the risk of losing his slim 17-14 majority in Parliament in the face of “the difficulties that the behavior or the actions of some of [his] Ministers” has caused for the UDP administration, now approaching the end of the second year of the party’s second consecutive term in office.

In Wednesday’s meeting of the House of Representatives, an Opposition People’s United Party (PUP) member cited a recent editorial carried by Amandala: “Barrow’s crisis: Belize’s crisis,” published in the Wednesday, January 29, 2014, mid-week edition of the newspaper.

That editorial said that, “Mr. Barrow had been making a lot of noise about running a tight ship after he first came to power in 2008. But he only had a 17-14 seat margin. This is now a government which really should go back to the electorate in quest of another mandate, we think. The Prime Minister will do all he can to prevent the collapse of his administration.”

“There is no doubt at all in my mind that the scandals have threatened to swamp us, that they have threatened to cause us to come undone, and naturally, that is a source of great regret, because to some extent, it is self-inflicted,” Barrow said, speaking with journalists on Wednesday afternoon after the House meeting.

Last September Mr. Barrow had to strip Minister of State, Elvin Penner, of the Immigration portfolio after his senior Minister, Godwin Hulse, raised concerns over allegations of impropriety in the issuance of Belizean nationality.

Last week Barrow had to strip another member of his Cabinet – this time it was Edmond “Clear the Land” Castro, who was accused by the Opposition of having caused the board of the Belize Airport Authority to questionably issue several thousands of dollars in checks to him and his constituents.

Yesterday in Parliament, Castro said he had not been guilty of any corruption – although he has definitely made errors during his tenure.

A new chapter in the saga opened this week when it was reported that another Cabinet member “had the goods” on Castro. UDP Lake I area rep Mark King had secretly recorded a conversation between Castro and ex-UDP campaign manager, Karim Berges, and gave the recording to the Prime Minister. It had been rumored that Castro incriminated himself during the conversation.

Berges told the newspaper that is not so. Berges told us that there is absolutely nothing for Castro to be concerned about in relation to the recording which King made in Berges’ presence, and whatever is on it can be stated publicly by Castro without his being at risk of being implicated in anything.

Mr. Castro was with King and Berges last Friday night at Berges’ place of business on St. Thomas Street in Belize City, and they were talking politics. Castro was reportedly speaking of concerns he has had about the delivery of services to his constituents over the years. We understand that the boat calamity which led to the loss of the life of one of his constituents just a week earlier also came up in the conversation.

While Castro reportedly expressed a sense of frustration over public works in his constituency, he was told that he should be able to come up with a plan, since he has a Master’s in engineering.

As for Castro’s loyalty to the PM, that issue, as we understand it, did come up, but gripes over his constituency notwithstanding, Castro showed up at Wednesday’s House meeting, where he sat right behind the Prime Minister, with whom he chatted casually before the House meeting.

Mr. Barrow was adamant, when pressed repeatedly by 7 News director Jules Vasquez, that he would not disclose what he had heard on the Mark King recording.

“I won’t tell you what the contents of the recording are. I consider it an internal UDP matter,” Barrow told Vasquez.

Vasquez said that King had been cautioned before for recording the chairman of the UDP in another matter, and he had given an undertaking that he wouldn’t record such conversations anymore.

Whereas both Messrs. Castro and Penner showed up at Wednesday’s meeting of Parliament, Mesopotamia area representative for the UDP, Housing Minister Michael Finnegan, who was undergoing delicate back surgery in California, USA, today, was absent from Parliament and will be until he is medically cleared to resume work.

Wednesday’s Special Sitting of Parliament was held to rush through four urgent bills which the Barrow administration said needed to be passed into law to avoid dire and far-reaching sanctions from the Financial Action Task Force (FATF), due to meet in France on Monday.

And while Belize may have averted the pain of international sanctions from FATF, the political problems on the home front continue to cause pain for the Prime Minister, who said that he is “distraught” over what has transpired in his party and government.

He told the media that, “I have been personally, extremely hurt because I, at the top of the pyramid, run completely straight, and that, I believe, is well-known. But, when indeed, I have to defend or appear to be defending behavior that is the opposite of straight, my personal credibility takes a great hit. So, I am distraught on behalf of my party, and I am distraught on my own behalf.”

Barrow said that, “I fully understand that if it happens once, twice, thrice, 4 times, 5 times, 10 times, it doesn’t matter what action I take, it will cause my administration to come unstuck.”

He conceded the danger of losing seats from Parliament: “Ultimately, if I have to take more actions, and it results in 2 persons or perhaps 3 persons who are in the House resigning from the Party, thus triggering either by-elections or a general election, I will simply have to do what my duty and conscience tells me I must do, and live with the consequences, which would no doubt be a loss of the consequent general elections.”

Barrow, however, told the press that, “I’m not going to go there easily, as I said, but if I have to, I will go there.”