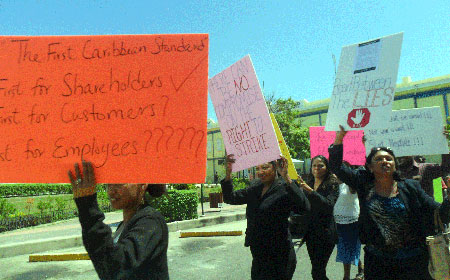 BELIZE CITY, Thurs. Jan. 21, 2016–The new collective bargaining agreement which our sources say had been reached almost two weeks ago between the management of CIBC FirstCaribbean Bank, on the one hand, and the unionized workers of the bank, on the other hand, has still not been signed.

However, information reaching our newspaper today is that the bank has proceeded to pay workers a 2% pay raise for 2014 and another 2% for 2015—still short of workers’ expectations—and a settlement has also been reached to address concerns of workers over their debts to the bank.

In December 2015, when the bank announced that it had decided to formally close its Belize offices at the end of January, president of the Christian Workers Union, Audrey Matura-Shepherd, had said that the bank originally offered workers a salary increase of 1% while the unions started with a bid for a salary raise of around 8%, in line with what the public officers and teachers have been receiving.

The bank later moved to 2% and the CWU tried to meet them midway by requesting 5%, but the bank has since refused to move from its position, the CWU president told us.

Matura-Shepherd told us today that she had not been informed that workers were paid their salary increases earlier today.

We understand that there are concerns that if workers use the money paid to them before the agreement is formally inked, it could be interpreted as a tacit consummation of the deal—even ahead of its formal signing.

When we probed a union source about the process for reaching the final concession with workers, that person told us that the parties had gone to the table and negotiated, and they did what they had to do to get the issues resolved as efficiently as possible.

We were told that the new agreement could be signed next week. Our information is that the CWU’s president is on leave until Friday and the General Secretary is off until February.

When we asked whether workers are happy with the settlement, we were told that the majority of them, if not all of them, are.

Our source said that while workers did not get everything they wanted, they were able to reach agreement on the major points.

First Caribbean’s last business day in Belize is Friday, January 29, and some of its workers are being offered jobs at Heritage Bank, which is assuming the Belize assets and accounts of the bank.