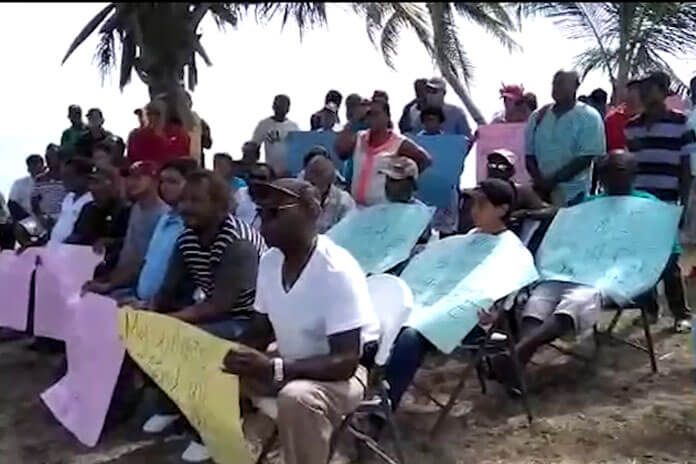 DANGRIGA, Thurs. Nov. 14, 2019– Their numbers are small, reportedly only 83 of 2,513 licensed fishers in Belize, and sentiments seem firmly against them, but some gill net users are holding fast to this fishing tool they have been using for decades. A small group of them congregated at Alejo Beni Park in Dangriga Town, on Wednesday, November 13, to emphasize to the nation why the proposed gill net ban would be wrong for Belize.

According to News5, in a report by Isani Cayetano, the leaders of the group in support of gill net said that those behind the proposal for the gill net ban do not have all the facts. They said that laws are in place to ensure the sustainable use of gill nets, and charged that the persons who are pushing for the ban on gill nets are doing so only because they are being paid to do it.

Spokespersons at the rally said that they considered offers that had been made to help them phase out the use of gill nets to be a pittance.

The argument against gill net use is that it is an indiscriminate tool, catching species that are not wanted and species that are endangered or protected. Gill nets are a particular danger to turtles and manatees.

In 2017 the Government of Mexico banned the use of gill nets in the Upper Gulf of California to protect the endangered vaquita, a critically endangered porpoise.

Oceana Belize, the organization that secured the ban of shrimp trawling in Belize, and the Coalition for Sustainable Fisheries, are at the forefront of the charge to ban gill nets in Belize.
They point out the negatives of gill net use, and that the problem is compounded by fishermen from outside of Belize who are using the tool in our waters. They say the non-Belizean gill net users are estimated to be more than local ones, and an outright ban is necessary to end this plundering of our resources.

Yesterday, Wednesday, the BNN (Belize Network of Non-Governmental Organizations) issued a press release which said that foreign fisher folk had participated in a rally in Belmopan that supported the use of gill nets in Belize.

The BNN said they believe that a former employee of the Belize Fisheries Department was supporting the group, and that in the interest of transparency and accountability the Department should “disclose the circumstances” of the officer’s recent resignation.

The BNN release also said the organization “reiterates its public position that gill nets are notorious for indiscriminately trapping and killing marine life,” and that several of their members “have pledged to provide financial support to licensed Belizean gill netters…contingent on the Government of Belize taking all necessary legal steps in 2019 to implement measures to phase out the use of gill nets in Belizean waters.”