Lane between Mule Park and Belize City will be effaced 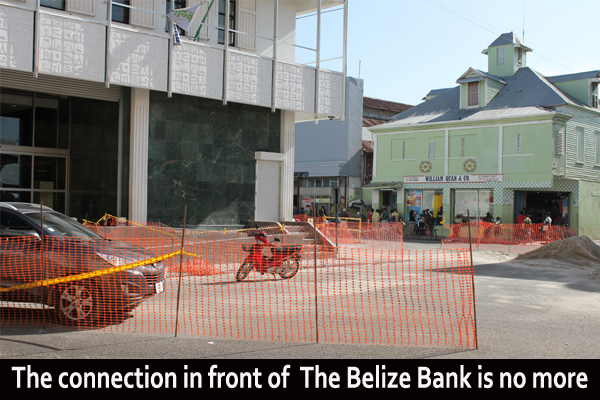 The Belize City Council has been doing renovations on a number of streets in the City. Major upgrades have been done in Downtown Belize City and one of those upgrade plans was to eradicate the lane between Mule Park and Belize Bank.

The lane was closed off for the past week while the Council did a test run of how the traffic flow would operate without the lane. There was quite some level of traffic congestion and complaints from the public about having to take longer routes to the Swing Bridge.

Mayor Darrell Bradley said today, Monday, that their analysis indicates that the closure of the lane is viable and they will go ahead with plans for removing it.

“I want to indicate here that it’s not my decision to interrupt that area; this was part of one of the projects for the master plan for Belize City and a lot of the works that we’re doing right now were taken from there and including that work,” he said. “So this is not a surprise and it’s not something that we got up one day and decided to terrorize people by closing off the street, that major artery. This is a plan that has been developed for over three years and widespread consultation was done,” he noted.

The Mayor said that the reason for this change is to encourage more traffic in the southern part of Albert Street where commercial activities could be stimulated and crime could be lessened.

“We’re monitoring the traffic situation very closely to ensure that it continues to work and people don’t continue to experience frustrations,” he said. “It’s a lot of work that we’re trying to do in a short space of time. We are asking people for their patience.”

The Mayor said that the Council is not led by public sentiment but by research and planning. All aspects of the plan’s design were researched before works began.

“Just because people criticize something is not sufficient reason to scrap the plans,” he said. “One of the reasons why we halted it was because we recognized there may have been problems. As a result of public criticism we responded, we stopped the work and we said let’s test this thing for a week, and it’s working.”

Mayor Bradley said that there are no reasons to delay the plans for the lane.

“We’re constantly developing and revising it to make sure that it works,” he said. “Nothing from what’s going on the ground right now says that we should stop. The traffic is actually flowing and it’s going about in the area we designed,” he said.

He added that the change will work but it will just take people some time to get used to it. The change in traffic flow will also encourage more walking in the area.

All streets in the Downtown area are expected to be completed by November of this year. The Mayor said that all the projects are being done around the same time because the Council wants the projects to be completed and enjoyed by the public while they are still in office.