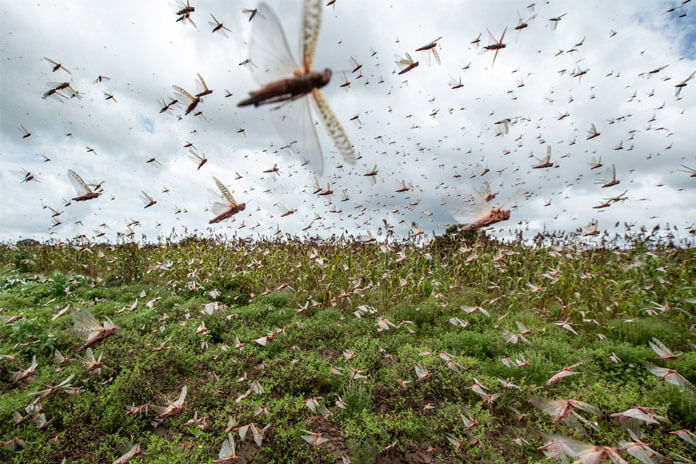 BELIZE CITY, Mon. July 20, 2020– Since mid-July, farmers in Belize have been on the alert for a possible invasion of locusts after swarms of the insect were reported to have been feeding on crops in parts of Guatemala, including the Peten District, which is not far from Belize.

The Director of Plant Health at the Belize Agriculture and Health Authority (BAHA), Francisco Gutierrez, told us that to date, Monday, July 20, 2020, it has been just a scare, but they are still monitoring the fields.

Mr. Gutierrez said that there was one localized infestation — about a quarter of an acre — on the perimeter of a corn field in the Yalbac/Spanish Lookout area in the Cayo District. Farmers spot-sprayed the section with a pyrethroid insecticide (Lambda-cyhalotrin) to prevent the insect from further damaging their crops.

There are many species of locusts in the Americas, but most of them do not pose major threats to crops. Mr. Gutierrez said that the species that does the most damage in our area is the Central American locust, and its preferred habitat is the drier regions along the Pacific Coast.

Swarms of locusts are not uncommon in our region, but it is on the African continent that species of the insect are known to cause massive devastation. Locusts prefer to feed and lay their eggs in grassy areas; when they swarm, they are not selective about what they feed on.

An explosion in the locust population usually occurs after a drought period followed by rapid vegetative growth.