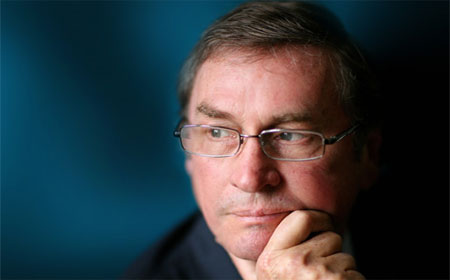 BELIZE CITY, Mon. Oct 19, 2015–Yesterday evening, Lord Michael Ashcroft was supposed to attend the launch of Call Me Dave, an unauthorized biography of the British Prime Minister David Cameron that he co-authored with the award-winning political journalist Isabel Oakeshott, but when he failed to show up at Millbank Tower, in Westminster, London, the news of his ill-health began to surface.

Reports are that the 69-year-old Ashcroft had been in intensive care for 18 days, in an undisclosed hospital in the United States, after he had suffered septic shock, as well as liver and renal failure, but is now said to be out of danger.

Lord Ashcroft was hospitalized on September 22, one day after “Call Me Dave” began to be serialized by British newspaper The Daily Mail.

The day Lord Ashcroft fell ill, he had just flown from Croatia to Turkey, where he had spent time visiting war graves and battlefields to mark the centenary of the Gallipoli campaign that occurred during World War 1.

Channel 5 News, an Ashcroft-owned company, reported tonight, Monday, that doctors were called after Lord Ashcroft suffered severe stomach pain and vomiting. After he was treated with antibiotics, the next day, September 23, he flew to the Turks and Caicos Islands, but his condition worsened and he was admitted to the National Hospital Providenciales.

Lord Ashcroft, however, only stayed an overnight at Providenciales; the following day he flew to Ohio, USA.

It was in the US that he was diagnosed with septic shock, liver failure, renal failure and internal bleeding from an intestinal lesion near his stomach. Channel 5 News reported that he suffered acute fluctuation in blood pressure that is now being treated with medication. Lord Ashcroft is diabetic, and his close family members feared for his life, said Channel 5

Channel 5 News also reported that Lord Ashcroft had to cancel an appearance on the station’s morning show Open Your Eyes. They reported that perhaps he would have talked about the BTL settlement with government

Lord Ashcroft, Channel 5 News said, is out of danger and is looking forward to visiting Belize for some relaxing time at Spooner’s Café, where he enjoys chatting with Belizeans.

Call Me Dave is reported to contain some embarrassing anecdotes about British Prime Minister David Cameron during his university days.

In the book, Lord Ashcroft had written that Cameron smoked marijuana while he was a university student.

Another claim made by Lord Ashcroft is that Cameron inserted a private part of his anatomy into the mouth of a dead pig.

Since he was unable to attend the launch of the book, Lord Ashcroft sent a message to the gathering, saying, “As you will have just seen, I have been a little pre-occupied for the past four weeks. I haven’t, of course, set foot in the UK since my illness, but I am reliably informed that my book has caused a little bit of a stir.”

Lord Ashcroft also thanked his publisher and co-author for defending the book during the controversy surrounding its publication.

He wrote: “My poor health over the past month has meant that my co-author, Isabel Oakeshott, and my publisher, Iain Dale, have – with support from my private office – been left to defend the book on their own.

“Although they have done a sterling job without me, I am well aware that I should have been standing shoulder-to-shoulder at their side but – as my health deteriorated – that was, of course, impossible.

“I have fought many political and business battles over the past half century, but this is the first one – and, I trust, the last – in which I haven’t led from the front.”

Lord Ashcroft is a British-born billionaire who has extensive business investments in Belize, and is a naturalized Belizean who once served as Belize’s Ambassador to the United Nations. His business enterprise in Belize includes Belize Bank, Belize Bank Holdings, Channel 5 and its parent company Great Belize Productions.

In addition, Lord Ashcroft has been a financial contributor to both the People’s United Party and the United Democratic Party.

The Prime Minister of Belize recently negotiated and settled the Belize Telemedia Limited (BTL) nationalization with Lord Ashcroft during private negotiations in Miami, where he agreed to pay compensation for government’s seizure of the telecommunications company, bringing an end to about 90 percent of the litigation between the government of Belize and the so-called Ashcroft alliance that has been going on for years.