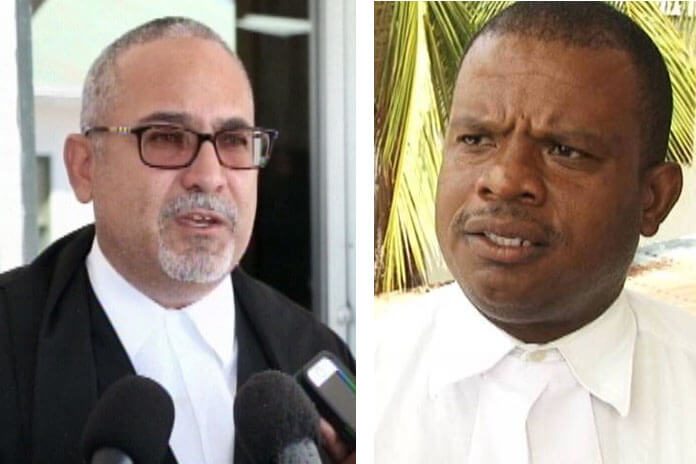 BELIZE CITY, Mon. Feb. 10, 2020– The Belize Peace Movement, the Belize Progressive Party and Vision Inspired by the People have all teamed up and brought a lawsuit against the Government of Belize for its failure to conduct re-districting as is required by the Constitution of Belize.

The lawsuit may have another claimant, because Lord Michael Ashcroft has filed an application asking to be allowed to join the redistricting lawsuit as an interested party.

In the Albert constituency, there were 3,468 registered voters compared to Belize Rural Central, which had 7,513, and Belmopan, which had 9,253.

Clearly, the disparity in numbers is quite outstanding and is a far cry from the constitutional requirement that each constituency have roughly the same number of voters as there are in the other constituencies.

After the hearing on Friday afternoon, attorney Andrew Marshalleck, S.C., who is representing Lord Ashcroft, told reporters, “The application has been set for hearing on the 17th of February.”

Marshalleck added, “We’ve seen a preliminary analysis of the numbers, and the extent of the mal-apportionment, and [we] are absolutely convinced it must be fixed.”

Marshalleck was asked to indicate when Lord Ashcroft expressed an interest in joining the lawsuit.

“What do you mean when? When did he first come? It was sometime in December, I believe, or late November,” he replied.

Marshelleck was asked if there are any concerns that the Belizean public may interpret his interest as something sinister, or that there is some reason that they should be distrustful of his interest.

“I am sure it will bring all the conspiratorial theorists out of the woodwork,” Marshalleck replied.

Attorney for the claimants, Arthur Saldivar, explained, “Today was set for directions in terms of disclosure and other requirements to move the matter along. But, as you have heard, we were not able to get to that today because there were other matters that the court must deal with before we can tackle the directions that the judge must lay down.”
Saldivar was asked if he and his clients discussed the interest of Lord Ashcroft in joining the lawsuit.

“We have just been made aware. Again, this is not something that we knew about in advance. But, certainly, having been made aware of it, my clients, being who they are, and understanding what Mr. Ashcroft has represented in the past in Belize, have their trepidations, and hopefully, one day before this matter comes before court for hearing, Mr. Ashcroft would make his intentions known to my clients, so that we would know where he is coming from, and what his interest is in this.

“Outside of that, the focus has to be on what the matter is about: the Constitution of Belize in relation to its requirement to ensure that the constituencies are as equal as possible, and how that portends to the validity and legitimacy of our democracy. And we cannot escape that. There is no personality bigger than the Constitution, no personality bigger than the interest of the people and the country. So, whatever his intentions are, down the road, I believe sooner rather than later, we’ll find out,” Saldivar said.