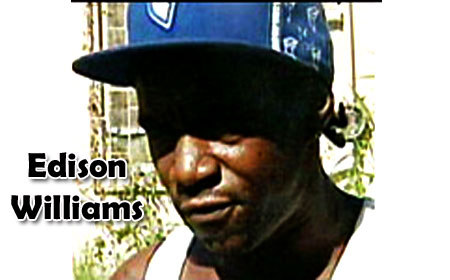 BELIZE CITY, Mon. June 20, 2016–Another young man has lost his life as a result of the senseless gun violence that is plaguing Belize City.

Edison “Southey” Williams, 29, was shot multiple times in the chest and abdomen by a vicious gunman who went into his yard at about 9:00 Friday night.

Williams, of a Kraal Road address, was standing alone, leaning on the side of a building at the front of the yard when the unknown gunman came up from through an alley leading from the adjacent street, and appeared at the same side of the house where Williams was standing, and shot him several times.

The killer then escaped back through the alley.

People who were socializing in front of the house scattered and ran for cover as the gunshots were fired.

Williams was then rushed to the Karl Heusner Memorial Hospital by his landlord, who was at home at the time, but at about 5:00 Saturday morning, Williams was declared dead at the hospital while undergoing treatment.

His body has since been taken to the morgue, where it will undergo a post-mortem exam to certify the cause of his death.

A witness of the shooting reported that the yard in which the shooting took place was a popular spot where many people socialized, and since it was Friday night, there were many persons in the yard when the shooting occurred. It was after the shooting that they saw Williams lying on the ground.

ACP Chester Williams said that Williams was the target. Police had not been expecting a gun attack on Kraal Road, since the area has been peaceful for quite some time. The department therefore had deployed officers to other areas where they thought gun violence was more likely to occur.

So far, the shooter has not been identified nor arrested, and the motive for the attack is not yet known.

ACP Williams said that police have stepped up patrols within the areas where the gangs are located, and are doing more stop-and-search of heavily tinted vehicles. They are also discouraging persons from hanging out on the street corners.

Williams also said that they will target known gang members moving around on motorcycles and bicycles, and that police will embark on some additional programs to address the violence in the city’s southside.

Williams was the father of two children, 9 and 11, and his wife of 7 years was Premilee Tasher, who told us that she and others were hanging out in front of the house when they heard gunshots.

Although she was about to run with the others, she said, she looked back and saw a tall man shooting a man on the ground with many shots. It was then that someone told her that it was “Southey.”

After the shooting, she went back and saw him lying on the ground, bleeding heavily.

Tasher told us that Southey had told her that he heard that there was going to be shooting in the area, but she did not expect that it was he who was going to be shot. Southey, she said, was a past gang member, but had changed his life and had been a family man. He had not been to prison for seven years, she said, and he was the breadwinner for the family and had taken good care of them.