BELIZE CITY, Mon. Nov. 15, 2021 — The National Amateur Women’s League (NAWL) 2021 competition continued over the weekend with a full schedule of five games (2 in the North Zone and 3 in the South) at different venues across the country (still with no fans in attendance).

In the only game on Saturday, November 13, defending champions Jewel Fury FC of Belmopan visited Punta Gorda’s Victor Sanchez Union Field where they proceeded to crush home standing Hyper Phoenix FC by a 9-1 score. Sharing the scoring for the visitors were Jada Brown (31’, 43’, 88’ & 90’), Gisel Baeza (13’, 40’ & 57’), Jesselle Conorque (55’) and Janivi Quiroz (73’); while Hyper Phoenix avoided the shutout with a late goal from Zeaunn Alvarez (78’).

Down south at the Carl Ramos Stadium, it was a 3-3 affair, after home team Kulcha United had jumped to an early 2-nil lead in first half over Rumberas FC from Independence. Netting a goal apiece for Kulcha were Shamika Lambey (4’), Naomi Gamboa (10’) and Gianni Gomez (47’); while Rumberas’ goals were by Kelsie Polanco (34’ & 60’ PK) and Sendra Casimiro (79’). 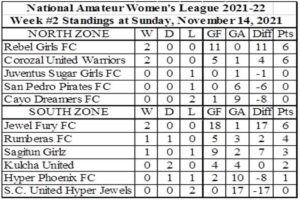