OAS commissions study in preparation for guide for decriminalization of homosexuality 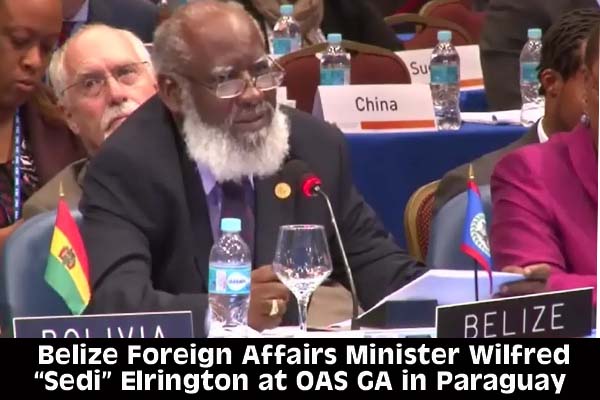 At its 44th General Assembly held in Paraguay earlier this month under the theme “Development with Social Inclusion,” the Organization of American States (OAS), the hemispheric organization of which Belize is an active member, passed a resolution supported by over 20 of 35 member states on Human Rights, Sexual Orientation, Gender Identity and Expression, which calls for a move across the Americas to decriminalize homosexuality.

The resolution calls on members to activate the mechanism of the Inter-American Commission on Humans Rights (IACHR), which recently heard a case lodged by UNIBAM against the Government of Belize, in order “to continue preparing a study on legislation and provisions in force in the OAS member states restricting the human rights of individuals by reason of their sexual orientation or gender identity or expression…”

The resolution also calls for the preparation of a guide, based on that study, “aimed at promoting the decriminalization of homosexuality and practices related to gender identity or expression.”

Belize Minister of Foreign Affairs, Wilfred “Sedi” Elrington, attended that General Assembly in Paraguay, and while he did not specifically make a formal statement on the sexual orientation issue, Elrington did declare that, “Belize is committed to a strong OAS, and to all the principles it stands for, and is hopeful that the strategic vision review exercise will result in a more agile, stronger and better funded organization that is more responsive to the people of the Americas, especially the poor and the dispossessed and the socially excluded…”

On its blog, UNIBAM said that Elrington spoke of government as “the guarantor of all rights!” and added that Elrington also acknowledged all interventions at the General Assembly, including the Latin American and Caribbean LGBTTTI coalition.

Prominent in Elrington’s speech were commendations for the OAS in its work as broker between Belize and Guatemala amid an ongoing territorial differendum.

“I don’t know what would have happened to us and to Guatemala if we had not had the support of the OAS,” Elrington said, describing the role of the OAS as “invaluable.”

To date, the Government of Belize has not reported on the OAS General Assembly; however, we were able to ascertain that it did not join in support of the OAS resolution because “several of the issues and principles addressed therein, directly or indirectly, are at present the subject of legal proceedings in the Supreme Court of Belize.”

This reflects the stance which the Government of Belize took at the last General Assembly of the OAS in Antigua, Guatemala, in 2013, that it could not accede to a resolution on the issue because of the case which UNIBAM has lodged in the Belize Supreme Court against the Government of Belize, for which a ruling has yet to be delivered.

This last OAS resolution was approved by the General Committee of the OAS at its first and third meetings, held on June 4 and 5, 2014, with majority support, although several OAS members, including the host country, Paraguay, registered reservations.

St. Vincent and the Grenadines expressed reservations over the use of the term “gender expression,” which it said is “not thoroughly defined internationally…”

“St. Vincent and the Grenadines considers that the terminology is heavily nuanced and moreover, that it is currently not defined in its domestic law. Since the discussion on the human rights of LGBT persons is an ongoing one at the level of the United Nations, St. Vincent and the Grenadines is of the view that the discourse at the OAS should be confined only to language which has been recognized or approved by the United Nations,” the country official documented.

Jamaica indicated that it was “unable to join the consensus on the approval of this resolution, given that the terminology of gender expression, as proposed, is ambiguous and has the potential to impose one value system over another. Furthermore, this term and other new terminologies used in the text, have not gained international acceptance nor are they defined in Jamaica’s domestic law.”