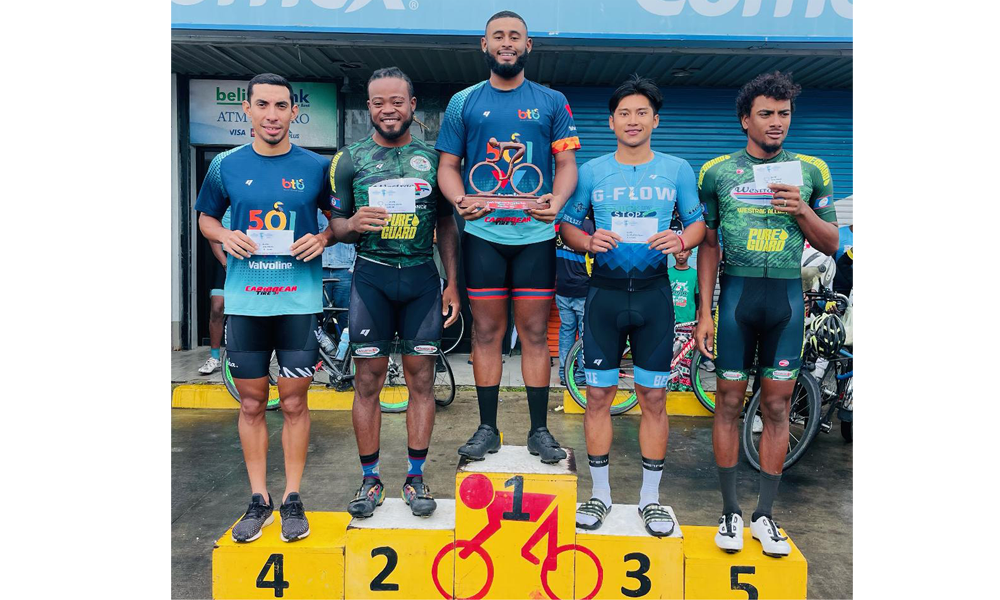 Despite cold and rain some, 30 Elites and 5 Juniors registered for their version of this race now in its 2nd year. Meanwhile, that number was doubled to 70 riders in the WW/GONS Category. There were 20 station prizes of $50 and $100 in this 62-mile race, which works out to about one every 5 miles.

The Elites took off at 8:15 while the WW/GONS Riders took off 10 minutes later.

In the Elite Category a break was quickly formed of 8 riders including 3 of the VALVOLINE/501 Squad in Oscar Quiroz, Joshua Fuller and Brandon Cattouse, while WESTRAC was represented by Wasani Castro and Eric Trapp. FAL had Derick Chavarria and newcomer Dylan Levy. Meanwhile, Henry Lee was the sole representative of the G-Flow team but rode a monster race. At the tape it was Joshua Fuller taking the big W, followed by Wasani Castro, Henry Lee, Oscar Quiroz and Eric Trapp who rounded out the top 5.

Meanwhile in the Weekend Warrior/Gons Category, 6 riders made good their escape in the first 5 miles. However, by the midway point 8 more riders connected to this front group making it a strong 14-man breakaway. Team Santino’s had 3 riders in this front group including Mexican Gabriel Cardozo, who had recently won the GONS Hills Race on November 20th. He was accompanied by teammates Mexican David Balam and Belizean Daniel Cano. Team SPD had Smoke Gladden and Philip Leslie; Running Rebels had Athlee Lozano and Claude Young; while the remaining riders were single representatives of other teams including George Abraham Jr. of Imani’s, Heno Moreira of VALVOLINE/501, Joey McKoy of Shattaz, and Ryne Bradley of Wateva Boyz, among others. Right after they sprinted for the $100 at Prison on the return, the attacks commenced with a little more than 20 miles still remaining in the race. As they exited the Boom Road unto the Northern Highway, the attacks by the Mexicans were relentless, with Cardozo sweeping up most of the station prizes. As they jumped the Haulover Bridge fatigue started to show on many riders, and as they approached the station prize at Design Depot, Heno Moreira attacked and only the Mexican Gabriel Cardozo caught the move. Cardozo swept the final 3 station prizes. As the remaining riders caught these 2 front runners there was less than a mile left to the finish line at San Cas Plaza. Right after the Buca Shell Gas Station, the Mexican David Balam, who was doing the yeoman’s share of the pacing, got a flat and that was it for him. As they went around the last roundabout with some 700 meters to the line, the other Mexican Gabriel Cardozo, 45 years of age, caught everyone by surprise with a massive attack, which he was able to hold to the line, giving him his 2nd victory in a row here in Belize.

Below are the placings in the different categories:

After the race, prize presentations took place at San Cas Plaza including Belikin Beer donated by one of my sponsors, BELIKIN. Indeed, let me thank my main sponsors: Design Depot, Minister Anthony Mahler and the BTB, Mayor Bernard Wagner and the Belize City Council, Belikin, and of course, San Cas. Thanks also to Aisha and the San Cas Team, who did great work for the presentations, as well as the participants, service personnel, traffic officers, officials, live broadcasters Ordonez and Israel Gonzalez, photographer William Ysaguirre, and family members who supported this event despite the cold and rain.

See you May 20th and 21st 2023 for the International Masters Tour-de-Santino for riders 40 & Over including many foreigners. Hasta la Vista…