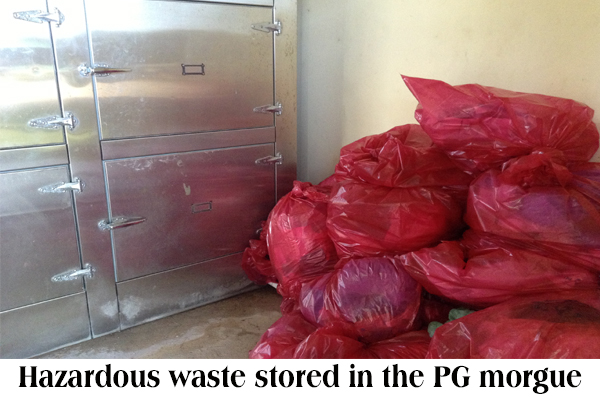 Wil Maheia of PGTV sounded the alarm on Tuesday that excessive hazardous waste was being held at the Punta Gorda Hospital, spilling over into the hospital’s morgue, because the hospital’s incinerator has not been working for a long time.

The “red bag” refuse, said Maheia, could pose serious health risks, especially since the access way to the hazardous waste, which includes used needles, had not been locked off.

John Bodden, Sr. Public Health Officer, has confirmed to Amandala that the hazardous waste—which has been onsite for weeks—would be transported today to Belize City for incineration.

Bodden explained that there has been a problem with the disposal of hazardous waste from the hospital, firstly because the hospital’s incinerator has not been working for nearly two years, and also because the dumpsite at which the waste was buried in the interim could not be used, because the excessive rains had rendered the low-lying dump unusable.

According to Bodden, the Ministry of Health had been planning to have the waste transported to the Southern Regional Hospital, where PG garbage had at times been incinerated, but the Dangriga-based facility has said that it cannot continue to accommodate the PG hospital, because the Dangriga incinerator, which had stopped working and had to be repaired, cannot handle the extra load.

Bodden confirmed reports that some of the waste, which ought to be stashed away in the storage room, was also being stored in the adjacent morgue. He said that tissue wastes, such as placenta, were kept in an onsite refrigerator, in line with infection control procedures.

He noted that the “green bag” waste, which includes kitchen wastes, is taken by the municipality for disposal.

We asked Bodden whether there are any other health stations experiencing problems similar to PG and he told us that while the PG incinerator is the only one that has not been working, other health stations have been struggling with their facilities – including the Karl Heusner Memorial Hospital (KHMH), which must at times engage the services of Belize Waste Control for garbage incineration.

Bodden said that most incinerators are malfunctioning and need replacement—but it is very expensive to get them replaced. He told us that the most urgent problems exist in PG.