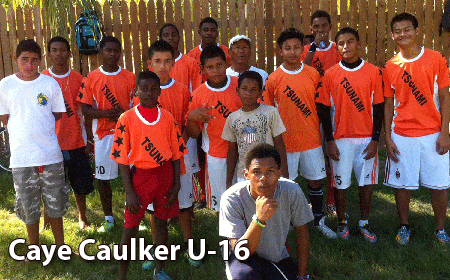 BELIZE CITY, Mon. Jan. 18, 2016–On Sunday, January 17, Poor and Famous Culture Club from Belize City visited Caye Caulker with a U-16 football team made up of 12 youths from the Sand Field (Hostel) area in Collet to play a friendly interaction game against 15 youths of Caye Caulker U-16 team. It was the first of a two-game schedule for a different area of the city every month. There will be trips to Caye Caulker every other Sunday for four months with youth teams from different areas in Belize City. The idea is to benefit the City youths with more opportunities and also to benefit the island village youths with more exposure, and especially to get a chance to interact and partake in a positive initiative for young men.

On January 31, Back-a-town gets to go; and on February 14, Cumberbatch Field Boys go to the island.

Some names of players from both teams are: