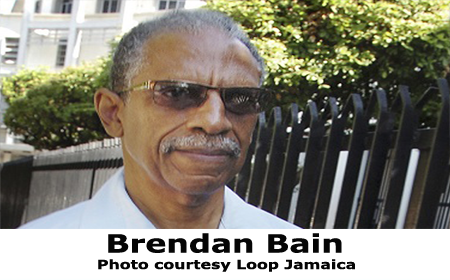 BELIZE CITY–Professor Brendan Bain, the Jamaican medical professional who gave an expert report to the Supreme Court of Belize in the constitutional challenge to Belize’s sodomy laws, lost his bid this week to get the Supreme Court of Jamaica to extend the June 2014 injunction which barred the University of the West Indies (UWI) from proceeding to fire him from his post as director of the Regional Coordinating Unit of the Caribbean HIV/AIDS Regional Training (CHART) Network.

Since Monday, the constitutional claim, originally set for hearing for 5 days but now extended to 15 days, has been ongoing before a three-judge panel comprised of Lennox Campbell, Paulette Williams and Frank Williams.

Hugh Small, QC, argued successfully against the application by Bain’s attorney, Georgia Gibson-Henlin, to have the injunction extended beyond its expiration date of January 13. It means that his termination letter of May 2014, which was barred by the June 2014 injunction granted by Justice Carol Edwards, takes full effect.

Bain was one of the expert witnesses approved by Supreme Court Justice Michelle Arana after a petition by the churches which had joined the constitutional case in Belize as interested parties.

His testimony, filed in August 2012, raised the ire of LGBT groups and rights activists. In that testimony, Bain said that, “The risk to [homosexuals] and their intimate sexual partners is not just to their physical health. The adverse physical and physiological consequences of STIs (including HIV) in [homosexuals] create significant and avoidable financial costs to individuals, households and governments. These important considerations must be included when considering whether to give public approval to risky behaviors such as are often practiced by [homosexuals].”

“Several of the behaviors described in the preceding paragraph are unsafe and therefore unhealthy because they create an unacceptable level of risk of acquiring and spreading infectious diseases that compromise health and in some instances life of the infected person and the person’s partners,” Bain added.

His full report is 14 pages, plus attached scientific papers and studies cited in the report to the court.

It was revealed during this week’s hearing in the Jamaica Supreme Court that at the time Bain tendered his report to the Belize Supreme Court, he had already been told by three colleagues that his testimony could spell trouble. Those persons are Dr. Earnest Massiah, Director of UNAIDS for the Caribbean, while at a conference in The Bahamas; Dr. John Walters and Dr. Ian McKnight, former Executive Director of the Caribbean Vulnerable Communities Coalition, while in Guyana, as well as Dr. Peter Figueroa, epidemiologist and HIV/AIDS researcher.

Bain told the court: “I got the impression that he [McKnight] was trying to negotiate me out of participating in the [case].”

Bain clarified in court that he was aware that the United Nations had been encouraging its member countries to adopt legislation for “the full realization of the right of everyone to the enjoyment” of the rights of people living with AIDS and other vulnerable groups.

These “warnings” notwithstanding, Bain proceeded with filing the report to the Belize court, clarifying that the information and opinion contained therein were not to be ascribed to any organization or institution with which he was affiliated, since he had tendered the report as an expert witness, he said, based on an order from the Belize court.

Bain also told the court this week that he faced “pressures” from rights groups and his colleagues after he gave evidence in 2012.

When the hearing began on Monday, Bain’s attorney, Gibson-Henlin, contended in court that Bain’s termination by UWI is a breach of his constitutional rights to freedom of thought and expression and a violation of natural justice. She also charged that Bain has been defamed by the UWI statement announcing the termination.

Apart from hearing witness testimony from Bain this week, the Jamaica Supreme Court has also been presented with a cache of documents, including UWI’s public statement, Bain’s expert report to the Belize court, and several correspondences to UWI bosses from the LGBT groups and activists who contended that Bain’s testimony in Belize resulted in a loss of confidence in his leadership of CHART, although none of these individuals, according to Bain, wrote him expressing their concerns.

In arguing against Bain’s application to extend the injunction barring his termination, UWI’s attorney, QC Small, told the court that the fund which was overseen by Professor Bain had been terminated by the US donor last September.

It was noted that Bain’s salary as CHART director was paid by an arm of the US’s Department of Health.

Although Bain has lost his bid to have the injunction extended pending the outcome of the hearing, his claim, challenging the constitutionality of his termination by UWI, will continue in the Jamaica Supreme Court.