Protesters chant — the price of fuel gone too high! 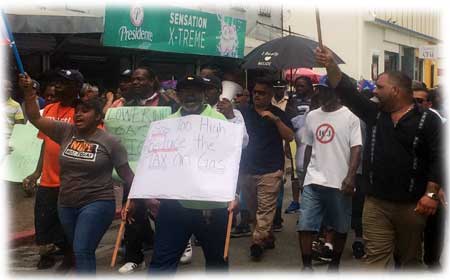 BELIZE CITY, Thurs. Oct. 5, 2017–Inclement weather did not deter about 100 spirited citizens from gathering at the BTL Constitution Park on Cemetery Road this morning to participate in a protest against the government’s taxation which has sent the cost of fuel to new highs over the last few weeks.

Shortly after 10:00 this morning they began congregating at the nearby Puma Gas Station that lies across the street from the park.

A number of prominent Belizean leaders joined the protest, which was organized by community activist Moses Sulph.

The leader of the Belize Progressive Party, Patrick Rogers, was there as well. His deputy, Wil Maheia, brought in a delegation of thirty something persons from the Toledo District. Derek Aikman, the leader of the newly formed Belizeans United For Equal Rights at Home and the Diaspora (BUFFERHD), was also among the protesters. 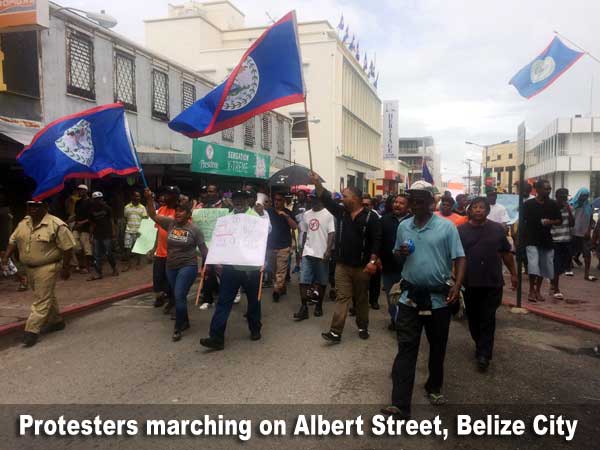 Also in attendance was the very loud community activist Raymond Rivers, who challenged the police present to arrest him as he condemned the corruption of the Barrow-led United Democratic Party.

Amandala asked PUP leader John Briceño, who said he attended the protest as a private citizen and not as the PUP leader, how different would a PUP government handle the issue of fuel prices

“Well, certainly, the issue of fuel has a direct impact on the economy and the productive sector. We would have to work with the private sector, because if we continue to pay high prices for fuel, we are pretty much shooting ourselves in the head,” Hon. Briceño responded.

Briceño added, “The Prime Minister promised that he was going to keep the price of fuel under $8, and here we are, several years later, it is at $12 and the tax alone is at $5. The Prime Minister can reduce the tax and then we can reduce the price of fuel to the productive sector and to the ordinary citizens, even the middle class, because everybody uses fuel, and the high cost affects every single individual from Corozal to Punta Gorda.”

We asked the PUP leader if he believes what the Prime Minister said — that he would reduce the price of fuel when the next shipment comes around the middle of this month.

“His record has shown that he says one thing and then does the complete opposite, and there are countless examples of this. What he needs to do is to reduce the tax. Forty cents out of every dollar that you pay for fuel goes into government coffers. That is way too much. He needs to reduce the tax on the Belizean people,” Briceño explained.

Sulph told reporters that the Prime Minister has never given a straight answer about the price of fuel, and he (the PM) thinks that the majority of Belizeans are ignorant or don’t have common sense.

Maheia explained to reporters that while the prices of fuel are high in Belize City, in Punta Gorda Town the prices are even higher.

“Punta Gorda has the highest gas prices in Belize and in this entire hemisphere. I don’t know of any other country that has higher gas prices than Punta Gorda Town right now,” Maheia said.