Restore Belize launches its literacy program in the city 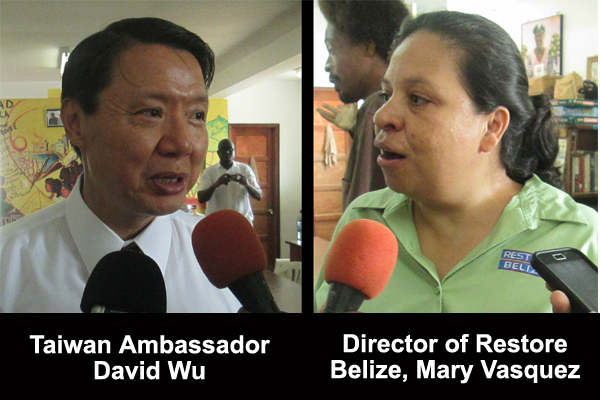 Restore Belize has undertaken a program to enhance the lives of disadvantaged Belizean citizens through the imparting of reading and numerical skills. A select group of program participants will be taught to read and write through the use of computer-based instructional programs. The initiative started in April this year, and so far over 500 people have been benefiting from literacy instruction, but plans are underway to expand the program so that countless others can benefit.

The initiative is to a great extent possible due to a $320,000 donation from the Embassy of Taiwan, which was used to buy computers and software programs to establish the computer-assisted learning sessions. The program was deployed in ten different local centers dedicated to improving the lives of those in local communities. Yesterday, Wednesday, July 23, Restore Belize took the Taiwan Ambassador His Excellency David Wu on a tour of the centers in which the literacy lessons are being carried out to see the program in action. Three of the ten sites were visited: The UEF Library of African and Indian Studies on the Kremandala compound on Partridge Street, the Water Walkers Boys and Girls center on Albert Street, and the YWCA on St. Thomas Street.

While visiting UEF’s Library of African and Indian Studies, Ambassador Wu said that he was pleased with the program, and was glad that his country was impacting the lives of Belizeans. He said that it was clear the students were enjoying the program, and the pleasure they derived from it would motivate them to keep on coming and to continue learning, which is the aim of Restore Belize, and the purpose of the program. The Ambassador also stated that more of the computer-based reading and writing programs are needed. He said that reading skills are vital in order for people to improve their lives in the modern world. Through the reading skills they gain, they will be able to access knowledge in many other areas and will also advance their knowledge in technology, he noted. The Ambassador also mentioned that this reading and writing program is an important tool for developing the country and charting the future of Belize.

When asked by Amandala whether the program would be expanded to reach learners countrywide, the Ambassador pointed to Restore Belize as the agency to which requests for the programs must be made, but declared that they stand willing to assist. He said that the Embassy of Taiwan is very pleased that they have played a role in making this program possible and hopes that they can continue to collaborate with Restore Belize through the donation of more computers and software, in an effort to continue impacting the lives of Belizeans positively.

Audley Mulati, program coordinator of a four-week summer program at the Library of African and Indian Studies, said that the objective of the summer program is to use the tools provided by the computer-based literacy programs to assist students as they improve their reading and writing skills. A pretest was administered before participants were admitted into the program. They all did well and are progressing in their literacy skills, he said.

Mulati said that students that are struggling with their reading and math skills are also benefiting from the numeracy software. He said that, at the end of the program, the students will have better math and reading skills. The program will also bridge the gap between students who are already advanced and those who are lagging behind.

Mulati said that the program will be ongoing, with each cycle lasting about 5 months, after which the current participants will graduate, and another set of participants will enter the program. Presently the children’s summer program is filled, but there is limited space in the adult area of the program, he said.

Mary Vasquez, the Director of Restore Belize, said that, after conducting research and carrying out consultations, they pinpointed deficiencies in literacy and numeracy as a problem area that would have to be addressed as part of their effort to improve the living conditions of those in the city. They noted that children were leaving primary school without having reached an acceptable level of literacy, and there were individuals attending job training programs who were not literate. Restore Belize thus drafted a proposal to carry out a literacy and numeracy program, and the Embassy of Taiwan agreed to provide assistance in the form of a monetary donation.

The organization then purchased computers and instructional software, and started to accept proposals from various agencies which wished to participate in the program as literacy and numeracy training centers. After a process of vetting and selection was carried out, ten institutions were chosen for the deployment of the instructional software, including the Kolbe Foundation in Hattieville, Eglah Training Center on Racoon Street, Port Loyola Library on the Central American Boulevard, the St. Martin De Porres Primary School on Partridge Street, The Southside Youth Success Program at the Commercial Center, The UBAD Educational Foundation’s Library of African and Indian Studies on the Kremandala compound, and the Water Walkers Boys and Girls Club on Albert Street.

Restore Belize held literacy and numeracy training courses for instructors for the ten selected institutions in February and March of last year. This month and next month, Restore Belize is conducting the literacy and numeracy programs at three sites. The organization has indicated that it is seeking to expand the program to other parts of the country. It is also getting ready to launch a public campaign, titled “It’s Time to Read”, this month.

Restore Belize thanks the Taiwanese Embassy, the Atlantic Group of Companies and other partners for their support in bringing this literacy and numeracy program to Belizeans.