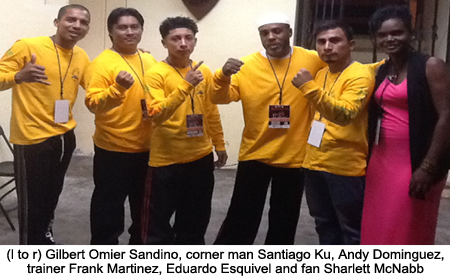 SAN IGNACIO, CAYO–Unknown to many, a contingent of three boxers who train in San Ignacio, Cayo – Gilbert Omier Sandino, Eduardo Esquivel and Andy Dominquez – along with their trainer Frank Martinez and corner man Santiago Ku, traveled to Chetumal, Mexico on December 20 to participate in a professional boxing event that was sanctioned by the Boxing Commission of Quintana Roo, and the main event was sanctioned by the W.B.C.

Upon arriving at the weigh-in a day prior to the event, due to their historic professional boxing tradition, the Mexican teams viewed us as very “light,” as they would say, “poco tiempo;” but after the events, their views of us changed due to the efforts and performance of our boxers.

There were 9 professional bouts and one exhibition bout. The main event was fought by a Cuban and a Mexican for a vacant W.B.C. belt. Our fighters were the co-features on the card. Andy Dominquez fought an exhibition bout, which was a 4 rounder. Andy clearly won 3 of 4 rounds, but was given a draw against his Mexican opponent. Eduardo Esquivel fought the first official professional bout of the night at junior welterweight. He scored a knockout of his Mexican opponent in 1 minute and 20 seconds of the first round. Gilbert Omier Sandino fought the next bout at junior middleweight. Sandino scored a second round TKO of his Mexican opponent.

We have great capacity as a people

Promoter Joe Marin has established a relationship with Mexican promoters in Quintana Roo, where Golden Boy Promotions and Pepe Gomez are promoting boxing events. Such a relationship has the potential that will enable our boxers to contribute to the global talent pool.

We have great capacity as a people. Unfortunately, we have not developed a system that will enable us to maximize our capacity. Consequently, such inability is not attributed to being devoid of the resources or the most important resources, which is represented by our youths. Once again, it is an issue of lack of leadership and visionaries within the ranks of leadership.
And when I speak of leadership, I am not speaking with the tone of political affiliation or partisanship (UDP or PUP). We are speaking of those who subscribe to such ideologies, but do not possess the inherent nature and intangible qualities that can contribute to effective leadership.

From a macro perspective, we need to closely examine the protocol and system of governance within the sporting system. Sport can be used as a versatile tool for development, and can have a positive effect on the psycho-social development of young people; and as an industry, it has economic benefits that are empirically verifiable.