Sedi tones down plea at UN for security assistance 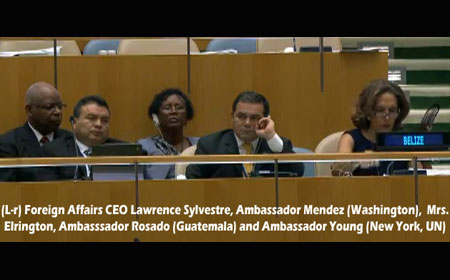 BELIZE CITY–Belize Attorney General, Minister for Foreign Affairs and Foreign Trade, Wilfred “Sedi” Elrington, told the 69th Session of the General Assembly of the United Nations in New York on Tuesday that security remains one of the nation’s priorities.

While Elrington made no mention of the recent murder of Daniel Conorquie at the Caracol Archaeological Reserve, allegedly at the hands of illegal Guatemalan loggers, he did use the opportunity to further a campaign for the parties to submit the territorial differendum to the International Court of Justice, a legal instrument of the United Nations.

Elrington’s remarks had a softer tone than his speech at the UN a year ago, when he confidently called on the UN for help – but apparently to no avail.

Elrington had sounded the alarm that “the forays” into Belizean territory are “an existential threat” which requires urgent resolution and action on the international front.

“While Belize appreciates that the activities by the Guatemalans in our border regions are as a direct result of poverty and failed development in their own country, we are concerned by the fact that such activities create conditions for conflict. There are some 65 Guatemalan villages along the 141-mile Belize-Guatemala border. These—the villagers – are largely indigent and unemployed.

“In the absence of employment, and increased security patrols on both sides of our borders, the incursions by the Guatemalans will not, in our view, abate, but will only get worse,” Elrington had detailed in his remarks at the UN last year.

In his speech this Tuesday, Elrington again spoke of this high priority issue, but stopped short of reiterating his plea for help for Belize—even in the face of Conorquie’s murder.
He said that primary responsibility for the nation’s security rests with the Government of Belize and its people.

He said that the Government has had to prioritize its areas of intervention, and so has concentrated on the basic needs of our nation: security, housing, education, health, employment and wealth generation. He also claimed that Government invests heavily in equipment and transportation for the security forces.

Elrington told the UN that highest on Belize’s list of priorities is the need to safeguard the security and territorial integrity of our country. He said that successive governments have invested heavily in trying to bring a peaceful resolution to “the Guatemalan territorial claim over our country…”

In August, Prime Minister Dean Barrow told reporters that no border dispute exists, and he stressed that the claim by Guatemala is “unfounded.”

“When I was growing up; when I became a young man during the early days, this was the unfounded Guatemalan claim,” he said.

Elrington indicated to the UN that the Barrow Administration is committed to seeing the case go before the International Court of Justice.

Under that special agreement, though, both parties also pledged to have the question of whether the case should go to the ICJ submitted to a popular vote in simultaneous referenda in both countries. That was to have been held almost a year ago, in October 2013, but Guatemala backed out of the arrangement and no new date has yet been set.

Elrington told the UN that for the past 33 years, Belize has enjoyed peace.

“We are convinced that any kind of international conflict, wars and rumors of wars, can only bring grief, and cause pain, hardship and devastation. That is why we keep working assiduously with our neighbors in the region to cement friendly, peaceful, collaborative and productive relations in order to achieve development for our people,” he said.