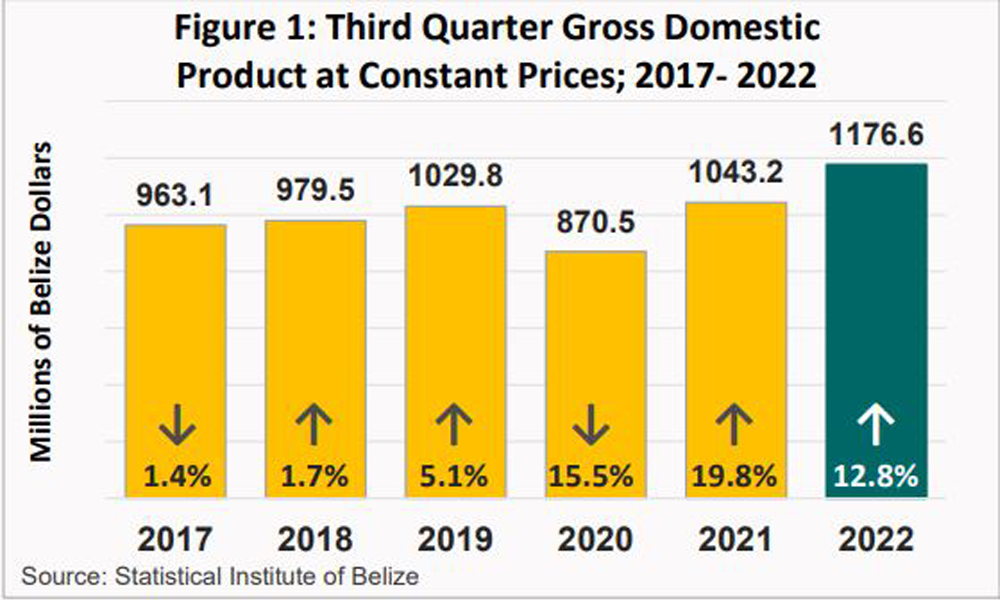 According to the SIB, the total value of goods and services produced for the third quarter was $1.176 billion, which represents an increase of 12.8%, or $133.4 million, compared to the third quarter of 2021. That growth is being attributed to improved performance in the tertiary and secondary sectors during the quarter. The SIB also highlighted the fact that the ‘Wholesale and Retail Trade’, ‘Hotels and Restaurants’, ‘Transport’, ‘Manufacturing’, ‘Construction’, and ‘Electricity’ sectors all saw an increase.

Meanwhile, overall productivity in the primary sector decreased—primarily in the banana industry, where banana production dipped from 27.1 thousand metric tons to 21.4 thousand metric tons—a 21.1% decline—due to diseases and increased cost of production. The total value of production in the primary sector is estimated at $77.1 million, which is 6.1%, or $5 million, less than the $82 million that was reported for the third quarter of 2021. In other key industries, however, there was an increase in output when compared to the third quarter of 2021.

Productivity in the secondary sector improved by 10.2% or $18 million, from $176.8 million in the third quarter of 2021, to $194.8 million in the same period in 2022. Production of beverages rose by 21% due to increased consumer demand as a result of the increased arrival of tourists and the resumption of public events in that period. There was also 28.4% growth in flour production due to local demands, and the production of citrus concentrates increased significantly by 183.2%, from 22 thousand gallons in the third quarter of 2021 to almost triple that amount: 62 thousand gallons in the same period, due to the leftover crop.