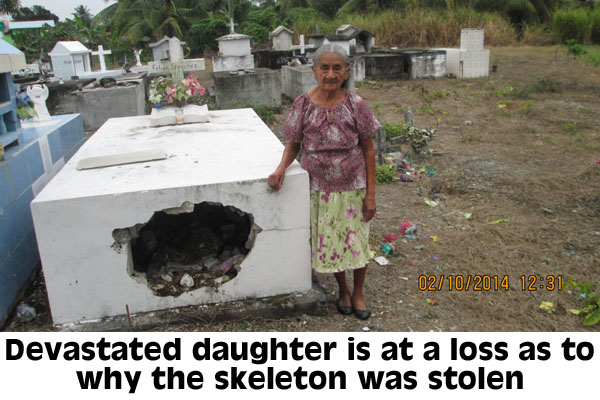 Felipa Sanchez died at age 84, and has been buried for 20 years

The tomb of a woman who has been dead for 20 years has been broken open by thieves and her bones stolen, for reasons no one can understand.

Ulallia Alamilla ,77, and her family of Douglas, a village in the Orange Walk District, were extremely upset when they discovered that the tomb of her mother, Felipa Sanchez – a resident of Douglas who died in the village in April 1994 at the age of 82, and was buried in the Douglas Village Cemetery – had been broken into, and her skeleton stolen for some strange, unknown reason, leaving only the jawbone and a piece of leg bone behind. The bizarre desecration of the tomb – the motives for which are unknown— took place sometime during Saturday night.

Neighbors reported that they had heard noises coming from the cemetery, but didn’t give much thought to the sounds. On Sunday morning, however, they visited the graveyard and were surprised to find a big hole in the front of Sanchez’s tomb, which was empty inside.

The neighbors quickly alerted Sanchez’s daughter, Ulallia, and her family, who rushed to the grave to see what had happened.

Police Constable Coba (he didn’t want to give his Christian name), the Douglas Village police officer who happens to be the grandson of Felipa Sanchez, told Amandala that they all went to the cemetery at about 8:00 yesterday morning and on their arrival they found a big hole in the tomb and the skeleton of their loved one missing.

The family found only the dress in which Sanchez had been buried, which was outside the tomb, as well as parts of her coffin. The tomb had been cleaned out.

Coba said that his grandmother’s tomb was the only tomb broken open in the cemetery. They surmised that the rest of the skeleton had been taken away in a sack, because it was in a sack that they found the lower jawbone and the tibia after searching the area. There were no vehicle tracks near the tomb.

PC Coba said that this is the first time that such an incident has happened in the village. He was three years old when he attended the funeral of his grandmother in the village cemetery, and the family is at a complete loss as for the reason why anyone would want to steal the remains of their loved one.

Ulallia Alamilla told Amandala that they are poor and her mother was not buried with any valuables. Her mother, she said, had been a domestic who labored to care for their needs. She would plant vegetables in a small plot to help put food on their table, Alamilla went on to say. She said that if thieves want money for the remains of her mother, she, a 77-year-old woman, is poor and does not have any money to give them.

Her son, the village police officer, is also baffled, and pondered aloud, in the cemetery, why out of all the tombs in the cemetery only his grandmother’s tomb had been desecrated and her remains stolen.

He said that the articles that were found outside the tomb were put back in the tomb out of respect, and also to assist the police in their investigation.

Police do not have any suspects as yet.

The Alamilla family of Douglas is seeking public assistance to recover the remains of their loved one, Felipa Sanchez. Anyone who has information that can help police solve the case is urged to contact the nearest police station, or the Douglas Village Police.

The family’s burning question remains: why anyone would be interested in the remains of their 84-year-old grandmother buried 20 years ago?