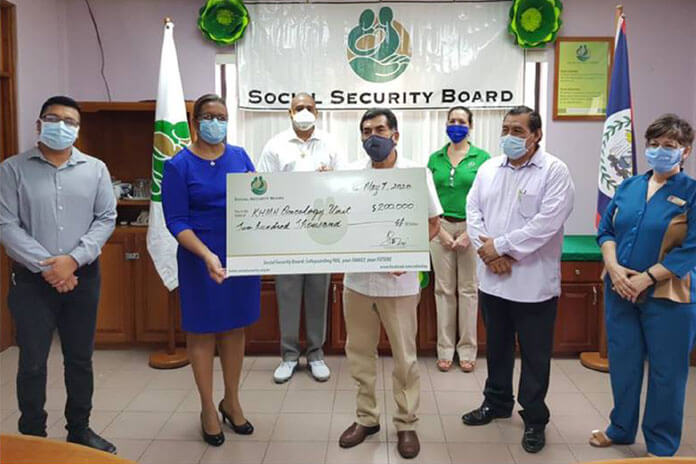 BELIZE CITY, Tues. May 12, 2020– Last Wednesday, May 6, the Belize Social Security Board handed over a check for $200,000 to the Karl Heusner Memorial Hospital (KHMH) for the continued development of its Oncology Unit.

The donation will be used for the purchasing of equipment needed for the functioning of the new Oncology Unit, which will provide clinical care and management of patients undergoing chemotherapy treatment for various types of cancer, said a press release from the Social Security Board.

On hand to receive the donation were the KHMH Chief Executive Officer, Michelle Hoare; and Dr. Ramon Yacab. Representing the Social Security Board were its Acting Chairman, Ariel Mitchell, and directors Lourdes Smith, Ramon Witz and Philip Willoughby. Chandra Cansino, the Social Security Board’s General Manager of Customer Corporate Service, was also at the handover ceremony.

An increasing number of Belizeans are turning to the KHMH for cancer treatment, the administrators of the national referral hospital told 7News.

Since the COVID-19 pandemic has resulted in the closure of Belize’s borders, many patients who would have traveled abroad for cancer treatment are unable to do so.

The CEO of the Karl Heusner Memorial Hospital Authority, Michelle Hoare, told 7News that, “The donation from the Social Security Board yesterday was specifically focused on supporting the completion of the Oncology Unit in terms of getting the furniture and the equipment that was needed to get the unit up and running. The Unit is in its infancy stage….”

Hoare added, “For some time now, we’ve been seeing patients diagnosed with cancer, right here at Karl Heusner, and there are different levels of management that were being done. Patients were being treated either surgically, medically. They would come to KHMH for the staging of their cancer.

“For the past 2 years or so, we’ve recruited an oncologist, Dr. Yacab. He has been with us, and he has been doing mostly specialist outpatient services for cancer patients, and some in-house referral for patients admitted with cancer.”

“As the numbers started increasing and the need for other forms of management became more evident, there was a proposal that was put forward for us to consider administering chemotherapeutic treatments in a very safe environment. We all know that treating cancer, it has some risks involved, and it has some safety measures that need to be considered,” noted Hoare.

Dr. Yacab said, “Cancer is an ever-growing problem. I think right now, it’s among the most frequent killers here in Belize, up to last year’s statistical data. So, I think it’s really important now, with the donation from yesterday; we’re gonna be able to get the equipment necessary.”

Feature photo: Check being handed over (courtesy Social Security Board)