The next Speaker of the House – Laura Tucker Longsworth 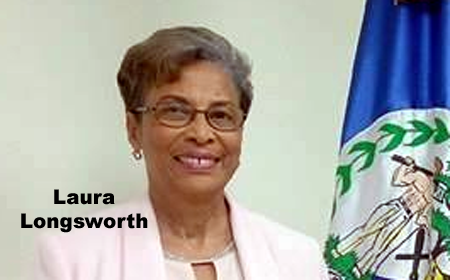 Since assuming office in 2008, Prime Minister Dean Barrow had previously appointed two male attorneys for the post of House Speaker. However, Longsworth has no legal background training; instead, she has much nursing experience.

She is a founding member and President of the Belize Cancer Society (BCS), which she represents on the Non-Communicable Disease Commission in Belize.

Additionally, she chairs the National AIDs Commission and is Chairperson of the Disciplinary Committee for the Nurses and Midwives Council of Belize.

Further research by Amandala revealed that Longsworth is a Director of the Healthy Caribbean Coalition (HCC), which is a regional organization that works to increase the level of attention and response to non-communicable diseases.

She had represented the HCC at the World Cancer Congress held two years ago in December in in Melbourne, Australia.

Longsworth, who holds a Master’s Degree in Nursing, is a passionate advocate for health care and cancer awareness.

She is a retired nurse and coordinator for the Registered Nurse (RN) Bachelor’s Programme offered at the University of West Indies Open Campus in Belize.

Last year she was bestowed the Most Excellent Order of the British Empire in honor of the Queen’s Birthday.

During the next House meeting scheduled for January, the Prime Minister will propose her name as Speaker of the House of Representatives and a vote will be taken.