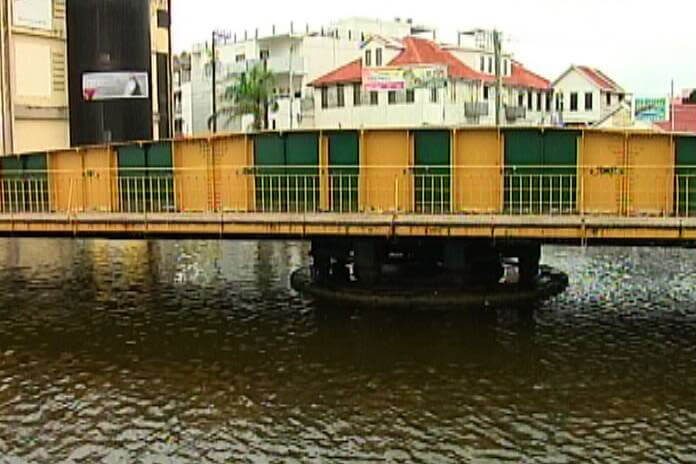 BELIZE CITY, Wed. Nov. 17, 2019– The Belize City Swing Bridge spans the Haulover Creek and connects the north side with the south side of Belize City.

It is the oldest swing bridge in Central America, and the only manually operated bridge still functioning in the world.

It was installed and opened to the public on 11 April, 1923. Apart from allowing for pedestrians, it was designed to allow sailing fishing boats with tall masts to pass the bridge and continue up the Haulover Creek.

Originally named “The Grand Bridge” it was funded by England’s King George III in 1818 when he gave Belize a 1,000 Pounds grant to build the bridge. It was officially opened on 9 March, 1818.

The swing bridge is manually operated by four persons using a hand crank. It was originally swung twice daily: once in the morning and again in the evening to accommodate boat traffic.

Since 2007 the bridge is only opened by special request, as boat traffic is not as heavy as before. It is also opened for an impending hurricane, to allow boats to seek safe harbor in the Haulover Creek.

Damages/Repairs
The bridge was damaged in the category 5 hurricane of 1931 that hit the city. It was said that the hurricane shifted the bridge into the street.

Repairs were made in 1999 after Mitch, and further restoration was done in the first decade of this century.

Automating the bridge had been suggested, but the idea was scrapped because it would take away a major tourist distinction in Belize City.