Home Features THE GARIFUNA MUST EXERCISE THEIR LAND RIGHTS
Features

THE GARIFUNA MUST EXERCISE THEIR LAND RIGHTS

The British Crown, under the leadership of King George III, was responsible for the forced removal of our Garifuna people from their nation state, “Yurumein”, now known as Saint Vincent & The Grenadines, in March of 1797 and their transfer to the island of Roatan, Honduras, where they landed on April the 12th of that year.

They decided to do this for the following reasons:

1. After they defeated the French in 1763, which ended the French and Indian Seven Year Wars, France unlawfully gave them the island of Saint Vincent, a sovereign nation, and other territories that they had unlawfully colonized.

2. They were tired of the resistance from the Garifuna people from 1772 to 1796 in defense of their nation and wanted to remove them from this planet.

3. The British were also forcefully occupying the Bay Islands in Honduras, which was considered Spanish territory as a result of the Treaty of Tordesillas in 1494 between Spain and Portugal.

5. They wanted the Garifuna people to occupy lands in the region, including Belize, that belonged to Spain so that they could claim the territories for themselves under the legal concept of Effective Occupation.

In the treaty that Britain signed with Spain in 1763, they were only allowed to cut logwood and mahogany in Belize and not to exercise control and ownership over the territory of British Honduras, now known as Belize. Also, the territory in Belize was only from the Rio Hondo River to the Sibun River, which was under the jurisdiction of the Spanish Governor in Quintana Roo Province, Mexico. From that point to the Sarstoon River, that area was under the jurisdiction of the Spanish Governor in Peten, Guatemala. The British had no intention at the time to make Belize one of their colonies, because they could have included Belize in this treaty and several other treaties, especially the Godolphin Treaty of 1670 (The Treaty of Spain). 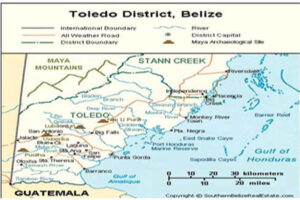 The following is stated online at https://belize.com/belizean-history-the-1763-treaty-between-spain-and-britain: “The Spanish gave permission to the British to cut logwood and also Mahogany as far south as the Sibun River. It expressly forbade the British from building any fortification, setting up any formal government or doing any agricultural works, or any other productive economic activities apart from wood cutting.”

In 1802 when the British granted the Garifuna people permission to come to Belize, they had them settling in the area that was under the control of the Spanish Crown. Spain had the authority to remove the Garifuna people from this area, but did nothing. From 1802 to 1821 when Guatemala achieved its independence from Spain, the Garifuna people lived autonomously without any interference or support from the British, Spanish or Guatemalan governments.

All the Garifuna people who were born in the territory during that period of time were still citizens of their homeland, Saint Vincent & the Grenadines. The Spanish and the Guatemalan governments could have granted the Garifuna people Spanish, and then subsequently Guatemalan citizenship, but they did not. In 1859 Guatemala signed a treaty with Great Britain granting the southwestern part of Belize to Great Britain.

The Garifuna people, under International Law, had the right to declare what they wanted to do with their lives, under Self-Determination of a people, but did not. In 1862 Britain made Belize a colony of theirs, and then moved to exercise jurisdiction over the Garifuna people.

The right of a people to self-determination is a cardinal principle in modern international law (commonly regarded as a jus cogens rule), binding, as such, on the United Nations, as authoritative interpretation of the Charter’s norms. It states that people, based on respect for the principle of equal rights and fair equality of opportunity, have the right to freely choose their sovereignty.

In all the discussions between Great Britain, Spain, Belize and Guatemala over the disputed territory in the south and western part of Belize, nothing has been mentioned about the length of time that the Garifuna people have been living in that area, prior to the independence of Guatemala on September the 15th 1821 and Belize’s independence on September the 21st 1981. They are all acting as if the Garifuna people do not have rights to the lands in the area that they have been occupying for centuries. Indigenous rights granted to the Mayas will have to be granted to the Garifuna people as well, because they are also indigenous people, who have been living on their lands prior to Guatemala and Belize becoming independent nations.

Not only were the Garifuna people living on their lands, but they were also using their territories customarily for their survival. Farming, fishing, hunting and many other types of cultural activities have been taking place since their arrival to the southern part of Belize centuries ago.

Even though the Garifuna people are entitled to their lands, the government of Belize will not give it to them, unless they assert their rights to their lands like the Maya people did. This will require informing the Belize Government that they intend to assert their rights to their lands. When the British Crown granted Crown Lands to the Maya and Garifuna people in 1872, these groups took it for granted that the Government of Belize would never infringe on their land rights. However, since Belize became independent on September the 21st 1981, both the PUP and UDP governments have been using, leasing, taking away and selling Maya and Garifuna lands without their consent and approval.