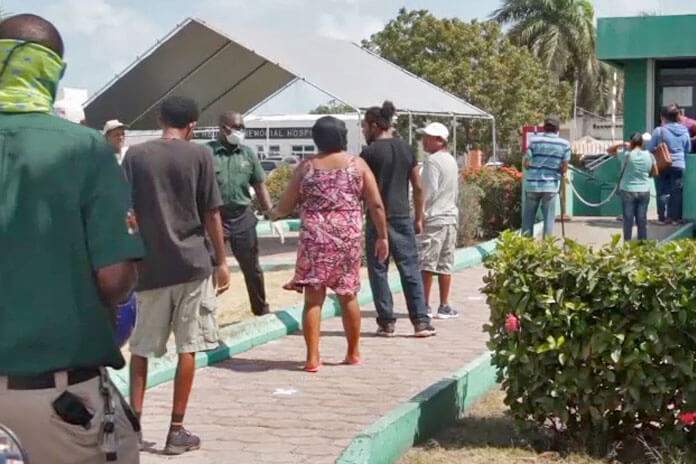 BELIZE CITY, Thurs. May 21, 2020– While Belize and the rest of the world at large continue to battle with the crippling effects of COVID-19, unemployment has quickly risen to crisis status in the country. The tourism sector was forecasted to bear the heaviest loss, as Belize entered a State of Emergency on March 23, 2020, and our borders and ports were closed off.

As early as March 25, the UDP’s “Economic Czar,” Dr. Carla Barnett, said at a press conference that more than 80% of all hotel staff in Belize and 100% of all tour operators would be without work. This alone would amount to nearly 14,000 Belizeans being jobless, not to mention those who work at the free zones and in the agricultural sector, which provides food to hotels and resorts across the country.

The impact of unemployment, however, has not been restricted to hospitality workers. Through the COVID-19 Unemployment Relief Program, which was closed to new applications within a month, over 80,000 Belizeans applied for financial assistance to alleviate the effects of unemployment. The online application portal had to be closed by the end of April due to the government’s inability to accommodate the growing number of applicants.

By now, it is clear that far more than 80,000 Belizeans are reeling from the effects of job loss in the country, as the economy continues to plummet and funds continue to be depleted. On Monday, another 200-plus Belizeans working closely with the tourism sector were confronted with the prospect of unemployment when Tropic Air announced that it would be letting go 60% of its staff by the end of the month.

Tropic Air is reportedly one of the largest private employers, and had a daily flight schedule of about two hundred flights per day. The municipal airline is down to about five or less flights daily, and can no longer afford to pay all its employees, whether short or long-term.
Even employees of local government and frontline personnel are falling victim to the crisis. Earlier this month, San Ignacio mayor Earl Trapp disclosed that ten persons had been laid off from the San Ignacio/Santa Elena Town Council, specifically from their revenue department.

Other municipal governments, although they have not laid off their staff, have resorted to a skeletal/rotational system wherein employees are receiving half their pay indefinitely.

And, as if the reality was not sobering enough, it has come to light that even frontline medical staff are being asked not to show up to work.

On Tuesday’s edition of The Whip, talk show host Vaughan Gill stated that Vibes Media Radio & TV has received information from the staff at the Karl Heusner Memorial Hospital that doctors are being asked not to show up for work because the government cannot continue to pay their stipends.

Gill went on to state that he has also been in conversation with Dr. Amin Hegar, who has been providing 24-hour optical services at the KHMH as part of a program that no longer exists due to lack of government funding.

Based on the financial projections shared in the last press conference held by Prime Minister Dean Barrow, it is morbidly uncertain when the economy will make a strong enough recovery to restore employment to the country adequately.

In light of the number of persons expected to complete primary and secondary school in the upcoming months, it can only be deduced that the number of eligible persons in the country who cannot find work will continue to increase.

As for Belize’s largest revenue earner, the tourism sector, the best-case scenario is that the borders will be reopened on July 1 — a hope that is constantly being overshadowed by health experts’ warning of a second and a third wave of COVID-19 that are expected to hit Belize.

The warnings are based on the fact that the countries around us, Mexico and Guatemala, still have high numbers of COVID-19 infections, and when our borders reopen, as they must, eventually, we will be at risk again for infection brought in by people who enter Belize from these and other countries who are not COVID-19 free, as Belize is presently.
Add to this Belizeans who insist in dealing in contraband goods, which they travel to neighboring countries to purchase.