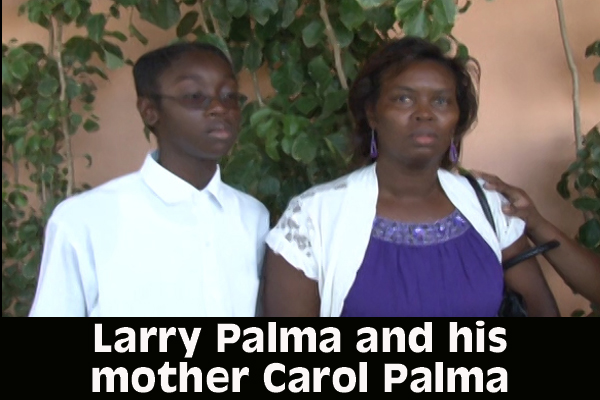 Although he placed 1st for the entire southern region, his mother says that a school “practice” did not allow him valedictorian honors

Today, Larry Palma, 13, received the award for obtaining the highest PSE score in the entire southern region of Belize, but while he has earned that recognition, the school which he attends has barred him from being the valedictorian of his graduating class based on a technicality.

Yesterday, Palma, who travelled to Belize City to collect his plaque for placing 9th overall in the recent Primary School Examinations (PSE), told Amandala that he is both disappointed and irritated because he worked really hard to achieve the grades that made him the best-performing graduating student at his school.

He described his primary school experience as bittersweet, because although he has risen to prominence through his stellar performance at school, he does not have the opportunity to graduate with the honors which he believes he rightly deserves.

Larry said, “The practice that they have is that they claim that if you enroll after Standard 4, you are not allowed to be valedictorian, salutatorian or anything of that sort. When I came into Standard 5, they never told me or my family that they had that practice.”

To show his displeasure, Palma made a decision to boycott the graduation ceremony because he was told that the highest award he can get is 4th place, even though he ranked 1st in the entire graduating class.

“If someone comes to a school and they excel, then they deserve to be recognized accordingly, and if you do things like that, then you are not motivating students, and it makes you feel like you should just give up”, he stated, disenchanted.

The school made the decision because Larry had been living in the United States with his parents and only attended Standard 5 and 6 at Holy Angels School.

His mother, Carol Moreira Palma, is equally upset, especially because both his parents are roots Belizeans who had temporarily migrated to the US and returned two years ago.

“If you have something as a practice and tell me that you will put it as a policy, then you need to do it. Don’t come and say, when he is already in Standard 6, that you will be working only with report cards from Standard 4, 5 and 6 when you know that Larry has been here from Standard 5. At first, I was told that he was going to be the salutatorian and I said that since it’s the practice, I will just go along with it, but after we had a meeting with the school three weeks ago, I learned that he would be eliminated from getting the award and that is what triggered this situation. How can my son be eliminated when he is doing well in school?” she questioned.

Mrs. Palma mentioned that she believes her son was targeted because she had confronted the school’s management about irregularities which, she claimed, had been taking place at the school.

In response to the situation, the Catholic Schools General Manager, Sister Barbara Flores, wrote a letter to Mrs. Palma which stated, “We concede that the traditional practice is not in writing. I have been assured that the administration, at a PTA meeting and at the time of registration, shared information regarding the issuance of awards to students. I understand that you state that you were not informed.”

The letter went on to say that Mrs. Palma and her son can be assured that the school is reviewing their practices and will be writing policies that will clearly state the practice in the future.

Palma told us that, after she met with the school to discuss the rationale behind excluding Larry from being valedictorian, the school’s management stood by their decision in the end, offering only to provide him with an opportunity to do the vote of thanks, which is normally done by a student who placed 4th.

Consequently, the Palmas decided to boycott the graduation ceremony, which was held yesterday evening, and instead, they traveled to Punta Gorda, where Larry was extolled for placing 1st in the PSE for the southern region of Belize.