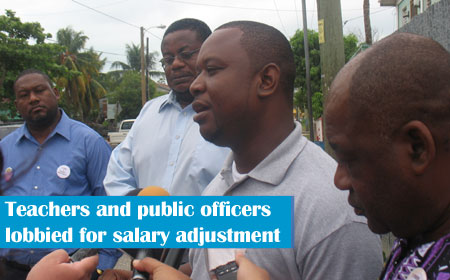 BELIZE CITY, Wed. Aug. 17, 2016–Teachers and public officers who were anxiously awaiting the final tier of their three-year salary adjustment package last month—amounting to a 3% salary increase—are being asked to hold off until next April, the start of the next budget year.

Prime Minister Dean Barrow met with leaders of the three unions representing them to formally ask them to delay the salary adjustment. Barrow said that the request was made as a consequence of Hurricane Earl, which two weeks ago caused individual property losses of upwards of $15 million and losses to agriculture and tourism of over $100 million.

On Monday, Barrow shared the preliminary damage assessment with the members of the Belize National Teachers’ Union, the Public Service Union and the Association of Public Service Senior Managers.

“They naturally have to consult their membership, so they are not able to give me an answer,” Barrow told us.

Next Friday, August 26, the Government will ask Parliament to authorize the issuance of more treasury bills—not to help meet expenses for hurricane relief but to pay the second portion of the arbitration award for the Ashcroft Alliance due next year.

Barrow said that the Government is entitled to request a deferral in the payment under the framework for the collective bargaining agreement, which says that such deferral is permissible if there is a change in material circumstances.

We asked Barrow about reports that the Government is contemplating an increase in the rate of the general sales tax (GST).

He told us that Government would not respond to a situation where lives have been shattered by Hurricane Earl by increasing taxes on people.

The only possibility, he said, is doing something in relation to “that good old staple”—speaking of fuel prices, but even that, he indicated, is not likely unless the cost of acquiring fuel plunges.

However, he told us that he did advise the unions of the need for “a degree of fiscal consolidation,” next year, given where we are with the productive sector, the economy and falling oil prices.