Home General UB union takes it to the streets
General 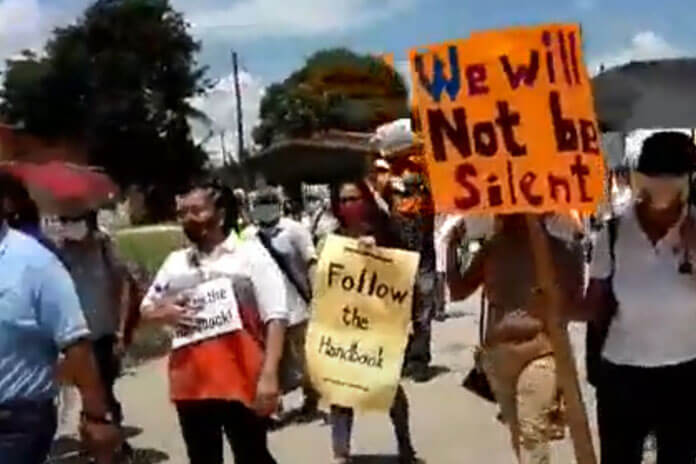 BELIZE CITY, Thurs. July 9, 2020– Today, Thursday, members and supporters of the UB Faculty and Staff Union (UBFSU) took to the streets of Belmopan to protest the decision by the UB board and UB president to declare the school to be in a state of financial exigency. This decision by the board was made after a reduction of the school’s subvention from $11 million to $8.34 million.

The UBFSU, however, has been very vocal about their disapproval of this resolution, which they assert was not issued in a transparent manner that would have enabled their participation.

In a letter dated July 1, the UBFSU requested that they receive by July 9, additional financials of the school for 2018-2019 and whatever financial data may be available for 2020 as well as documentation regarding any policy that the board may have revised regarding the financial status of the university and matters of redundancy. Subsequently, on Thursday, July 2, the university’s board of trustees made it clear that the union was not recognized as the certified bargaining agent for the faculty and staff of UB.

On Friday, July 3, the union held a press conference at which they delivered an ultimatum, stating that if the board did not recognize the union as the sole bargaining agent for the faculty and staff and prepare to begin negotiations by Monday, July 6, at 11:00 a.m., they would take industrial action.

A meeting ensued between the UBFSU and the UB Board of Trustees on Tuesday, but did not yield favorable results for the union. UBFSU president, Dr. Pio Saqui, explained in an interview with Love FM Belize that the board held firm in their policy not to share any unaudited data and, as a result, it would not be possible for the union to receive the financial records it had requested.

Also, according to Dr. Saqui, the chairman of the board stated that they did recognize the union, just as they would any other union in Belize, but would not negotiate with them, as UBFSU does not hold a certificate with the chairman’s signature.

In response, the union proposed that they employ an external auditor that both parties agreed upon, who would represent the union and review the financials; thereafter, he/she would relay his/her findings to the union in order for them to determine whether the financial exigency is justifiable and proceed with plans/proposals on how to approach the school’s loss of revenue.

The UB board did not consent to do so, and as a result, a group of union members, along with a multitude of supporters, led by Saqui, convened in front of the National Assembly Building chanting and marching from the Ring Road to the UB headquarters.

During the protest, members of the media asked the union president to restate his demands, which are as follows:

1. The board must give the union bargaining power to represent the faculty of UB.

2. The board must give the union access to financial data so that they can make an informed decision on how to proceed with the school’s budget cuts resulting from the economic contraction caused by the COVID-19 pandemic.