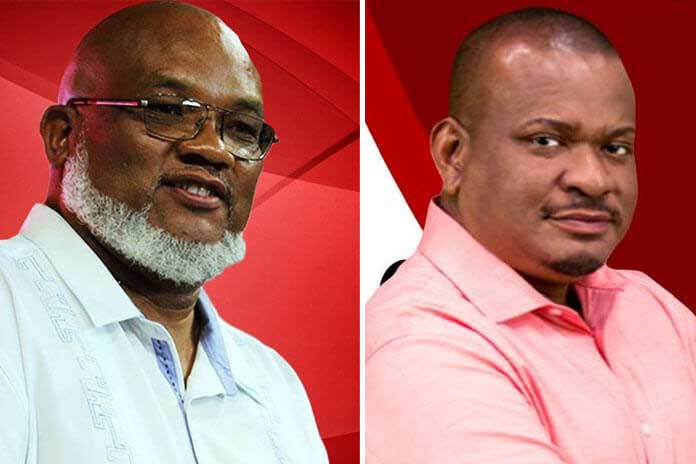 BELIZE CITY, Tues. Mar, 17, 2020– The last party council meeting that the governing United Democratic Party (UDP) held, ended in major disarray after April 5 was set as the new date for a national convention for the selection of a new party leader.

UDP chairman, Attorney General and new Minister of National Security, Michael Peyrefitte told reporters after the meeting that if applications were received from more than one aspirant to the post of leader, they would proceed to a contested convention.

Saldivar was in the process of calling his first press conference when evidence was presented in the Lev Dermen money laundering and fraud trial in Salt Lake City, Utah, which directly implicated him and exposed the fact that he had lied to the Prime Minister when he denied receiving money from Dermen.

The revelation from the Utah trial derailed Saldivar’s leadership of the UDP and forced him to resign in less than 72 hours after his massive victory. The following week, the disgraced Saldivar resigned from Prime Minister Barrow’s Cabinet, but continued to maintain his innocence, claiming repeatedly that he did nothing wrong.

In a post on his Facebook page, Saldivar explained that he would endorse Hon. Dr. Omar Figueroa as the new UDP leader and advised his (Saldivar’s) former rival, Faber, to do the same.

Saldivar said in his Facebook post, “Very shortly, Hon. Dr. Omar Figueroa will be submitting his name for consideration as Leader of our great United Democratic Party. When, at the request of our Prime Minister and colleagues, I agreed to step aside as Leader-elect; it was with the understanding that the Party would look for a consensus Leader that would be acceptable to the two factions that had previously competed for the post.

“My resignation was not an admission of any guilt or wrongdoing and was never intended to give the defeated candidate, Hon. Patrick Faber, another chance to become Leader. My resignation was to afford the Party the chance to endorse a consensus Leader.

“I therefore confirm that I support the endorsement of Hon. Dr. Omar Figueroa as our new Leader. I do, however, now indicate that if Hon. Faber enters his name again for the post of Leader, then I will also enter my name for the post. I have no doubt that the delegates who supported me on February 9, 2020, stand ready to do so again.

“However, now is a time for humility and unity, and it is therefore my sincere hope that Hon. Faber and his supporters can join me and my supporters in endorsing Hon. Dr. Omar Figueroa as our Leader and avoid a contentious convention.

“Given the current global pandemic with COVID-19, I urge the Central Executive of the Party to table and pass a motion for the endorsement of Hon. Dr. Omar Figueroa as our Leader.”

Well, Faber did not endorse Dr. Figueroa; instead, he tossed his name back into the leadership race. This prompted the disgraced Saldivar to do the same.

Saldivar’s timing, however, could not have been worse, because hours before he made his Facebook post, Lev Dermen was found guilty on all 10 counts of money laundering and fraud.

So then, Dermen is no longer an accused fraudster; he is a convicted fraudster. Not only that, but his conviction has placed police investigators within easy reach of the trial transcript through the Mutual Legal Assistance Treaty between Belize and the United States.

Furthermore, Saldivar is under a criminal probe in Belize to determine if he had broken any laws. Between the time Saldivar won the UDP leadership convention and now, his position has not improved. So, since he had stepped down as Leader-Elect, what significant change has occurred between then and now that qualifies him to enter for a second leadership run?
Critics on social media are saying that this second UDP national convention to elect a new party leader is beginning to look like “a new circus with the same old clowns.”

Apparently, there is nothing in the UDP constitution that can prevent Saldivar from submitting his name, and nothing to disqualify him, except perhaps the UDP Ethics Committee, which is tasked with scrutinizing aspirants for executive posts in the party.

The fallout from the Lev Dermen guilty verdict could impact Saldivar’s application to contest the leadership post.

It is not yet known if Dr. Figueroa will submit his name to enter the leadership race. He has until March 25 to do so.